Last week the SPX had its second consecutive losing week. A very good Non-Farm Payrolls report incited fear of an early Fed interest rate hike. And the continuing negotiation about debt payments between the IMF and ECB and Greece seems to be entering the final break-down phase. Investors opted for safety over greed and sold stocks to lock in profits.

This week the index futures roll over to a new contract on Thursday. On Friday the September contract will be the actively-traded front contract; the price adjustment will increase volatility. There is not much in the way of economic reports this week, but the FOMC is meeting next week, and the possibility of a rate increase will make the markets nervous. 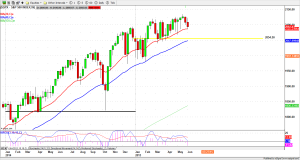 The past two week’s decline was not severe. It didn’t do any serious chart damage. The S&P 500 index still is above its yearly pivot level. The long-term trend remains up and bullish.

Last week we mentioned our SP500 LONG-TERM price prediction. So far we stick yo our prediction for a sideways movement for this year. As long as the index stays under 2150-35, the price should go sideways (we expect within the 2136 to 2015 range) first before index finds its footing for the next upside move.

This is not a good season for buying stocks. The index could be grinding towards the yearly pivot level near 2055 or moving lower to the 2015-1980 zone to complete a short-term correction. 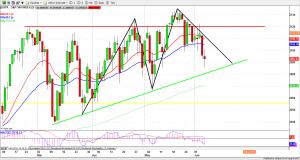 The SPX has recently passed two Change In Trend (CIT) days, the short-term CIT on May 26 and the intermediate-term CIT on June 5. The price declined on both days, followed by relatively strong selling, but the volume was lower following June 5.

To us that indicates that many buyers are not giving up yet. They still hope this market will advance further at some point. They may be right eventually, but as traders our focus is on the daily chart, and the immediate outlook is for a further decline.

On the daily chart there is a big “M” pattern which could be interpreted as a double top. The neckline is at the 2070 level. The last time we saw a similar pattern on the daily chart (in October 2014) the market broke its 135-day moving average line and then fell an additional 6%. History does not always repeat, but we are watching the 2075-55 zone carefully in the coming days. 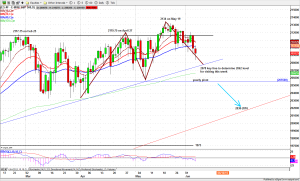 ES closed at 2092.25 Friday, below the 40-day moving average. It gave out a bearish outlook in the short-term. But the current decline hasn’t done very much damage to the short-term chart yet. The volume on Friday was lighter than the previous day.

The 135-day moving average line is below the current price and this should act as strong support to prevent a further decline — the first time the price touches it. As long as it holds the price up, the ES could make some kind of bounce.

There is a bearish pattern on the daily chart. The ES is likely heading toward the short-term uptrend line lying around 2075 in the coming days.

Download the full analysis with the buy/sell numbers here: 150608-plan