The S&P 500 cash index ($SPX) closed at 2109.99 on Friday, up 17.16 points and a 0.8% gain for the week. Last week traders focused on the mid-week FOMC policy announcement and the quadruple expiration later in the week. The SPX reversed from the low and recovered the prior week’s loss.

This week the markets are likely to turn their attention to the Greek debt issue. Any bad news from Europe suggesting a default on the next payment by Greece will rock the stock market. June 30 is the due date for the next payment and Greece is unlikely to make that payment.

The question is what the “Troika” – the IMF, the ECB and the European Commission (EC), in effect Greece’s largest creditors – will do next. The crucial element is the Emergency Liquidity Assistance which is still being provided to Greece, and which is all that allows Greek banks to continue functioning. The Troika’s response, which may be known before the open Monday morning, will directly influence US market moves. 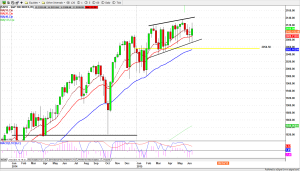 Even though the short-term up and down move didn’t damage the long-term or intermediate-term uptrend, the length of time we have been moving sideways brings us a concern.

The index has been holding the price under the 2125 line for the weekly close since it made new highs on May 21. In other words, the index wasn’t above to close above 2125 on Friday in the past 4 weeks. It could be a sign of an intermediate-term top if we get three more weeks with the closing price still below 2125 line or a break below 2050 line on closing basis.

Because this is a long time-frame trend it may take a little bit longer to generate the strong selling signal. But most of the recent price behavior indicates that the market is probably in a topping process. 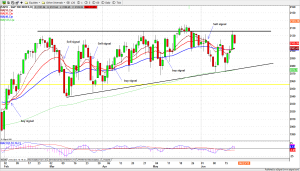 The 2125 level has been holding the SP500 index down since last October. As soon as the price rallied to close near that level, the following day the rally failed to continue, with the single exception of the brief break-out to a new high in May, which closed above 2125.

Below the current price, there is a rising 135-day moving average line acting as long term support. Every time the price drops near it this line also held the price up well.

Those seem to be the boundaries for the time being. The index could remain inside its 2125 to 2070 zone this week if the news from Europe is either less bad than expected, or ignored in US markets.

There are two patterns developing on the short-term chart that merit attention. One is a short-term bullish pattern, a double bottom. The second is a short-term bearish pattern, a head-and-shoulders. We discuss both in detail in the following analysis of the mini-futures. But one or the other is likely to determine the next near-term move in the market. 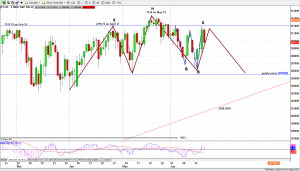 Based on the ES daily chart, there are two possible patterns developing this week:

Both Bulls and Bears will defend their battle lines, and the result will set the tone for this week.

Here’s the member content for this week. Scroll down to the bottom for the link to th detailed trading plan, with the buy/sell numbers.