Last week: Quadruple witching led to a scrambled week for the SPX. The index dropped sharply after the FOMC announcement Wednesday – somewhat surprising, given the all-but-explicit promise of no rate increases this summer and probably none this year. That dovish message has boosted stocks in the past.

This time the SPX dropped to the resistance level around 2050, then bounced back just below 2080 (thank you, PPT) before falling back into the close. Option expiration contributed to the relatively modest volatility and relatively small range (about 50 points for the week).

This week: Watch for events outside the market to move prices this week: Fed Chair Janet Yellen testifies to Congress Tuesday, and in Britain the referendum to leave/stay in the European Union takes place on Thursday, probably with preliminary results available in the early sessions Thursday. Regardless of which side wins the Brexit referendum will dominate the last half of the week, barring a declaration of war somewhere. 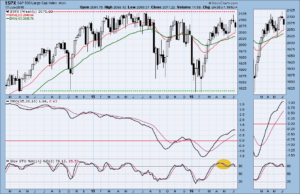 The significant element on the long-term chart continues to be the retreat from the long-term resistance around 2120-2130 that dates back to February 2015. This is a broad topping pattern after a very long bull market and it has successfully rebuffed eight attempts to move past it in the past 17 months.

But the SPX has stubbornly returned to the high area each time, despite a couple of waterfall price declines that looked like the start of a new Bear market.

The current decline doesn’t look like a waterfall. It has managed to hold above important resistance levels – so far – and still shows fairly strong bounces. We have to treat this market with suspicion; certainly it shows more risk than reward at this point. But we haven’t seen the rush for the exit a new Bear would require. Yet. 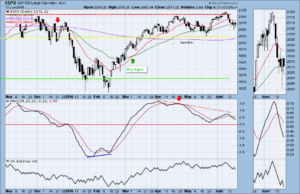 The SPX has returned to the trading channel it has been in since 2015, after failing to break out above the overhead resistance, and we’ve seen the kind of decline a failed breakout usually produces. The weekly momentum is waning.

This week external events are likely to be the prime movers in the index. We expect Fed Chair Yellen to be dovish – i.e. anti-rate increase – and reassuring about the positive signs in the US Economy. Later in the week the Brexit vote will be the issue.

The polls are too close to call (the Leave side is slightly ahead). But all the big money wants to Remain, and one way or another the Big Money usually gets want it wants. If it squeezes out a Remain victory that outcome will push US stocks higher.

If there is a rally, don’t fall in love with it. This is a situation where “irrational exuberance” may take the market further – in either direction – than it really wants to go. 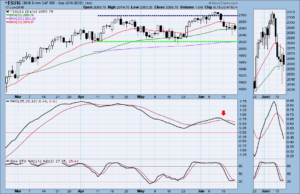 The futures look calm by comparison. The ES closed between the 20- and 40-day ema lines. Today the more downside move should be expected in early sessions.

2075 will be a key level to watch carefully. A failure to break out topside could lead the price back down to last week’s low area; eventually the 2020 level could be seen.

Based on the daily chart, the PMO indicator declines and the slow STO is in oversold area. That suggests the ES could have a brief bounce, but may not be able to hold the gain.