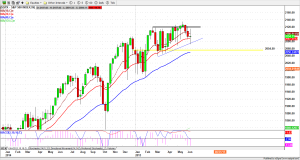 The SPX had a volatile week; down on Monday up strongly on Wednesday, back down to where it started the week on Friday to form a doji. This down, up, down run could result from contract rollovers and option contract activity.

This week is a quadruple witch expiration week. We also have the FOMC policy announcement and the Fed Chair’s press conference on Wednesday. All eyes will be on the Fed interest rate movement, if any. It will be a wild week if the Fed does something surprising, like a sudden and unexpected rate increase, or alternatively hints that interest rates will not change this year.

The recent decline didn’t damage the long-term and intermediate-term uptrend. The weekly doji candle shows uncertainty; the SPX hasn’t made a decision to start its intermediate-term correction yet. As long as the price stays above the 2055-50 zone, the index is just making a short-term adjustment (correction).

The index has been held below the 2120 level since February of this year, except for one quick rally which was quickly erased in late May. Last Wednesday’s rally may be the same kind of fake. The index could make lower lows in the short term until it identifies a support area for the summer season below the current price. 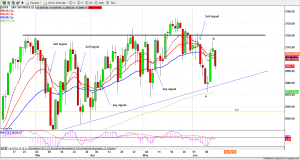 For the short term, the SPX is still in its downtrend channel. The index rallied on Wednesday and managed to regain the rising trend line (Blue) on the daily chart. But on Friday it gave back half those gains. Was that midweek rally false?

For now, it probably was. Based on the daily chart, there is a recent ultra-short-term selling signal. Until the 10ema line crosses above the 20ema line, we have to lean towards the bearish side.

There are additional bearish signs. One is the “M” pattern we talked about last week. The second is a potential A-B-C correction pattern. The 2072.14 level could be the A low and last Wednesday’s high 2115.02 could be the B top. The next C low should go lower toward the 2050 area.

As long as the index stays under the 2100 level, we are likely to see an attempt to challenge the support around the 2072 level. The selling strength could be increased if the 20ema line crosses below the 40ema line.

Early in the week we may see the index hold the price up waiting for the FOMC announcement. If Fed does increase interest rate in June – and that would be a surprise – the index could sell off sharply. If not, it could bounce up little further near 2110-05 zone. But on quad witching expiration week with an FOMC meeting, pretty much anything can happen.

Here’s the member content. Scroll down to the bottom for the link to the full trading plan, including the buy/sell numbers. 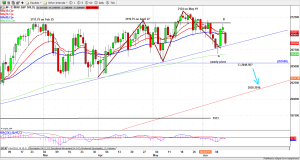 ES (i.e. ESU5) closed at 2085 on Friday. Because of the contract rollover the September contract will now be the front contract to trade. Based on the closing price, ES remains in a short-term downtrend, and Thursday’s high could be the B top. A break below 2080 should lead ES toward the C low destination around the 2049-50 zone.