Before we start, I want to convey sincere best wishes for a healthy and prosperous 2016 from me and Bill, and from all the staff at Naturus.com

Last week: The market was sold off last week, partly a result of year-end tax-loss selling, and partly due to uncertainty about the Dubai fire on the final day of the year. The selling sent the index into a negative yearly close for the first time since 2008.

This week: The market could get a boost this week – the first trading week of the New Year – from the “January effect.” Some investors will be buying back tax loss sales from December and the panic surrounding the Dubai fire dissipated with the news that it was apparently not terrorism. There is a good chance investors may jump on the chance to scoop their favorite stocks at a lower level. But the rally may not hold up very long; in the closing days of the year we got a one-day buy signal quickly followed by a one-day sell signal. Confusion reigns. 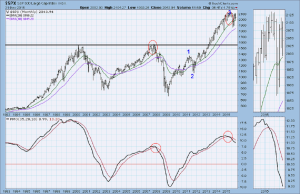 The LONG-TERM price momentum indicator (PMO) gave a monthly selling signal after the index made a new high at 2034.22. But the SPX did not fall very much.

The price was held up well by the long-term trend momentum support levels (20/40 monthly ema). At this point, as long as the PMO indicator doesn’t turn up, it suggests lower prices this year.

The high made last May high should be the top of impulse wave 3. Right now we still assume that last year’s low could be the low of the correction wave 4. But this has not been confirmed by the price. To confirm that the wave 4 low has been posted, the index has to make new highs above the 2035.50 level.

Wave 5 could end at the same high level at the wave 3 top or higher by forming a sub-wave 1-3-5 to end the bull market. The index went sideways last year, and didn’t give out any direction for the long-term. Therefore we still look for a breakout – in either direction – to indicate the direction of the next move. Here are a couple of scenarios we are considering:

If Wave 4 is not complete (i.e. if there is still some further move down to come) the first resistance at the 2080-85 zone should hold the price down. The index needs to move back down to the 1950 level and break through it to retest last year’s low area around 1867.10-1849.36. That will shake out many weak hands among long-term investors. If the decline does not penetrate the support provided by the 40-month moving average line around 1850, there is then likely to be a fast reversal to the upside at that point.

If wave 5 is in progress the market has posted its maximum decline and will rally at least to the old May high around 2135, or higher. Only in this way can the index resume its rally to form sub-waves of Wave 5. The final destination by our calculation should be either at 2337.10 or higher at the 2485.39 area.

But this final destination describes a multi-year move. It doesn’t mean the index will go there this year. The index has made a 62% rally from 1578, the break-out level of the long-term double-top pattern, pulled back slightly, then recovered most of the loss. This is a critical level on the long-term chart and we are watching carefully to see how it is resolved.

The high made last November may also be treated as a medium-term double top if the index can’t break above the 2085-80 zone this time. 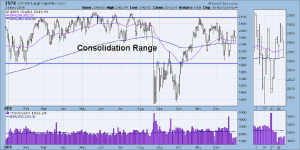 The index closed at the middle of the consolidation zone last Thursday. The declining volume emphasized that volume support is becoming weak.

A one-day buying signal reversed into a selling signal last Thursday. That kind of rapid reversal makes it difficult for traders to execute their trades. But the volatility is likely to continue: the index moved 1% or more on 72 trading days last year. High volatility should be expected again in 2016.

This week the SPX could go in either direction, based on the yearly closing price. For the positive side, the price still closed above 200-day moving average line, and the NYSE Adv/Dec line didn’t fall much despite the price decline.

On the negative side, the small Caps still lagged behind the Big Caps. Bulls and Bears will definitely fight for their levels – 2075-85 and 2020-2010 – before the winner is established.

Howdy stranger. Normally from this point on all the content — the good stuff — is reserved for paid members. This week you can see it for free.

If you find it useful, you can see it every week for a modest $9 per month. Sign up here. 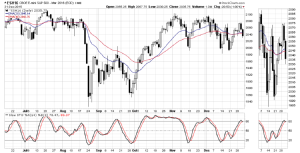 Last Thursday the ES sold off after 12:45pm, in reaction to the news about the Dubai fire. People thought it could be terrorism and dumped their positions. The market closed under both daily support lines.

The buyers may return for the trading first day of the New Year. The afternoon fear is now seen as overblown, and Dubai is apparently just a tragic accident that has no market impact.

But ES also could go low first if it fails to move above 2045-48.50. The Dec 18 closing level is 1992. That’s when the big traders left for holidays; this level usually needs to be retested again when they return.

The Short-term slow stochastic oscillator (SSO) has an overbought condition. We could see ES to go down before it bounces. How far price can go depends on how fast the SSO indicator moves into oversold territory.