Last week: The market sold off strongly last week in reaction to turmoil in China: weak economic data and and crash selling in the Shanghai exchange. The large cap index (SPX) not only broke the last two months support, it also gave an intermediate-term sell signal, a declaration that a bear market may be on the way.

This week: This week the January options expire. Last week’s sell-off could lead to a continuation this week as the market searches for a short-term low. An oversold bounce of some kind should be expected, but it will likely be brief and unlikely to change the direction of the near-term downtrend. 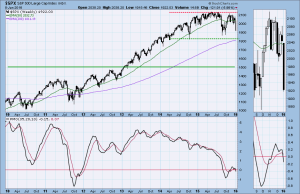 The SPX had the worst week for the start of a year in its history. It not only broke its major short-term support level, it also gave an intermediate-term selling signal, a strong hint the long-term trend is going to change direction.

Last week we mentioned two possible considerations that might affect future price movements. This week we have two more to consider.

Long-term cycles in markets often go through something similar to the stages of grief, except that for markets the major divisions are Denial, Acceptance and Greed. Last week it looks like we moved from Denial to Acceptance.

The preceding Greed phase could be fairly said to have ended with the May 2015 high. Denial was apparent in the market’s continuing hopes for an end-of-year rally. The Acceptance stage should start soon, and may have begun last Friday.

Early last week we saw some fund managers still on the buying side. But by the end of the week, especially when there was no rally into the close in the last hour on Friday, it looked like capitulation from the buy side.

This could indicate agreement from both Bears and Bulls on more declines to come, and that could turn any rally into an opportunity for trapped Bulls to get out.

“Buy the dip” is morphing into “Sell the bounce.” That will keep the bounces short, and prevent them from changing the trend.

Note that this acceptance stage can last longer than you might expect.

Our price model shows there is lots of room for downside movement if the 200-week moving average (currently around 1810) fails to hold up. The short-term can get more oversold until the longer term indicators move into oversold territory.

Last week a strong decline moved the intermediate-term into sell mode. Now last year’s low area (1831) is likely to be retested first before the index can have a decent bounce. 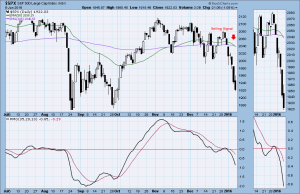 The SPX gave a sell signal last week. This correction is just beginning. The downside momentum was strong. It appears that short-term bottom hasn’t been seen yet even though the pit bulls expected to see Thursday/Friday’s low as the low area for January option expiration this week.

The index already broke 2020-2000 support formed by last two months. The next support is around 1860-1830, which was the last August low area. The PMO (price momentum oscillator) indicator has dropped a lot, but is still a little way from the September low area. This could indicate the price will continue to be weak in early days of this week.

The volume was heavier on the downside last week. Any oversold bounce will not change the short-term downtrend direction; instead a bounce will only encourage the former buyers to get out of their long positions.

Sorry. This section contains the detailed buy/sell levels for next week, and is restricted to paid subscribers. You can sign up now at half the normal price — $9 for two months — and get instant access. USE THIS LINK