Last week: The index recovered most of the losses made in February. So far it is only down 0.7% for February as of last Friday, but is still down 6% from the January open.

This week: It is a decision week for the Index. It has to decide which direction to take for the break out from last week’s consolidation range. If it is going to break out to the upside, it will require some external news to fuel the rally.

There is not much change in the long-term outlook. The 200-week moving average line plus the low of the broad long-term sideways range will continue to act support until the index breaks them.

The PMO indicator (weekly) still points down, but is far from oversold territory. It gave no sign of turning up last week while the price was rallying. This indicates that the current rally may not last very long.

Both act as resistance at the current stage. The current rally resulted from a short-term oversold condition but now the short term is overbought.

Will the current rally continue? We have to see how the market reacts to the resistance area. A continuation rally this week could be a trap for the Bulls. 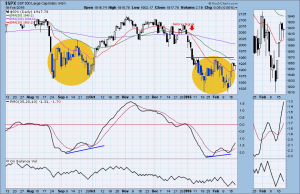 This kind of movement could result from the February option expiration. It still does not confirm that “the bear market is ending.”.

But the key resistance zone from 1940 to 1950 just ahead will capture the attention of traders. This will be a major short-term key line for this week.

Staying under this zone will keep the index chopping between 1950 and 1890, with a break below 1890 level causing the downside to resume.

Conversely, a push above 1950 level could trigger a run on the overhead stops and push the price up to the 1986.75-93 zone for testing.

Sorry. This section contains the detailed analysis for next week. It is restricted to paid subscribers.

You can join here and get instant access for as little as $9 per month.