Last week both NASDAQ and SP500 closed Friday at or near the high for the week on the strength of strong earning results, especially from tech stocks: Google, Amazon and Microsoft. The S&P 500 hit an intraday high of 2120.92 and closed above its previous high 2117.39 set on March 2.

This week is the end of April and beginning of May. It is typically a bullish period. But with both a GDP report and an FOMC rate announcement this week it may not turn out as we expect. Concern about a possible Fed interest rate hike in June will continue to influence the US market.

The Durable Goods report last week hinted that the GDP report this week may be weak. Some traders speculate the Fed could launch a “QE4” to keep the economy going if the GDP report is really bad, or keep the interest rate unchanged for a longer period. The Street is hoping the FOMC statement this week will clarify some of those questions. 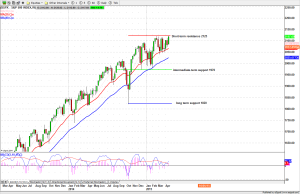 The SPX is down one week and up the next, but continues to close below the short-term resistance line, as it did last week.

Based on the weekly chart (left) the long-term uptrend remains intact and strong. The price is far above the long-term support line at 1980.

A short-term rally out of the current congestion area is possible, but you should not expect too much from it… unless the Fed announces QE4 this week, which is not likely.

SPX has traveled inside the range from 2125 to 2040 for about two and half months. If the market is going to move outside that range it needs to get something started soon, before the seasonal upside bias ends and traders “go away in May,” and the summer doldrums take hold.

Our next CIT day is May 11 and May 25, not too far away. If the SPX is going to extend this rally to reach the short-term target at 2168-78 it needs to make some sort of move this week. The alternative is to stall in the current congestion area in a sideways move to kill time. 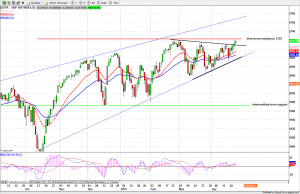 Last week SPX recovered all the previous week’s loss and managed to close Friday above the previous week’s high.. It not only broke through the resistance of the “wedge” pattern that had been holding it down, it also held above that pattern for two days. The price action was bullish.

Now the SPX will encounter the next short-term resistance area this week. If it can manage to break above 2125 the outlook will be bullish, with a good possibility of a further rally to the next high in the 2180-65 zone, just below the intermediate-term resistance line (the blue line on the chart).

Based on the daily chart, a potential “W” pattern is developing. The neckline overlaps the short-term resistances zone. The key support area for the SPX is 2090-85. A failure to hold above that support zone could lead the price to drop back near the short-term support at 2075-70 for testing.

The Q1 GDP report and the FOMC report with a possible decision on interest rates will be released on Wednesday. The Street will focus on the GDP numbers first as an indicator of the Fed rate decision, if any. There may be some wide swings and extended range moves in the SPX as a result.

We also have Apple’s Q1 earnings reported after the market close on Monday. The whisper is that APPL will be above expectations – of course – and that may give the market a bump.