It was a strange week: a sell-off on Monday and Tuesday, a strong overnight rally going into Wednesday, and a 40-point dump on Friday. “Unsettled” doesn’t do it justice. The sell-off might bee seen as the result of depressing debt news from Greece and changes in market shorting rules from China. But in our view, it was an option game, with the price action predicated on the April option expiration on Friday. 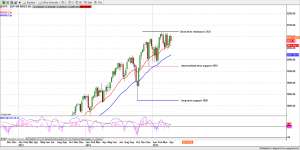 With a gap up and a gap down, the index formed a triple top pattern in the short term, which may affect immediate action but which is not enough to change the long term uptrend.

The 2045-60 zone remains the pivot level for this year. By holding above it we could form a short-term triple bottom pattern, which may help to hold the price up. It is possible for SPX to build a broad consolidation range this year.

As long as the range resistance ahead at 2125 doesn’t break, a sort-term or sideways correction is still a possibility. A move below 2035 would give confirmation that short-term support is breached, and the index could go down toward the next support in the 2000-1980 zone to test the major intermediate-term support.

The long term and intermediate-term indicators are overbought. They can remain in overbought territory for a longer time period, provided a series of short-term pullbacks can relieve some of the overbought pressure from time to time. However we should keep a careful eye on this triple top and bottom to see how it works out. This pattern is developing in two distinct forms, which could be bullish for the long term but bearish for the short-term.

Last week SPX sold off on Monday and bounced from the low at 2083.24 made early on Tuesday. It gapped up on Wednesday to make weekly high at 2111.91 and gapped down on Friday to sell back down to Tuesday’s low area for closing. It formed an island reversal gap pattern over the last four days. This is a short-term bearish signal.

Based on the daily chart, the “wedge” pattern remains intact as long as SPX stays inside it. This week SPX either has to break out from this pattern or continue chopping around inside it to smooth out the short-term selling signal.

Last week the ES had a fake upside break on Wednesday without any follow through on Thursday. Volume was thin on the upside move.

So far the ES remains in the “wedge” pattern lying inside a longer-term rectangle. Today we may see ES go inside last Friday’s range for consolidation in the early session first, perhaps followed later by a breakout move.

A break above 2089 could lead ES to move up to fill last Friday’s unfilled gap at 2099.75 area. A move below 2062.50 could push ES down to the yearly pivot level at 2055 area for testing. The short-term indicators have selling signals. Any bounce could give our ultra-short-term traders a chance to re-short again.

Not a member?Sign up here for $1