The S&P 500 cash index ($SPX) closed at 2080.73 last Friday, up 53 points from the previous week’s close. The rally continued, but the last two days — after the index options expired — were virtually motionless. Friday was the smallest daily range of the year.

Last week: The SP500 index continued to rally and pushed higher to close near the high of the week. The sentiment remained bullish but the volume declined steadily from the beginning of the week. Monthly options expired last week.

This week: The market will continue to focus on the risks in the current rally. So far SP500 index hasn’t been able to break last May’s high. It could attempt to do that this week. But a failure to close above 2100 early in the week could lead to a minor pullback in the last two days.

Earning reports being published this week will likely increase the weekly range for the index, especially since there are relatively few economic reports and fewer appearances from the Fed: after three speeches Monday there is blessed silence for the rest of the week. 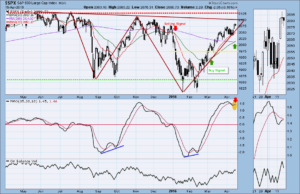 The S&P500 index has not been able to post new bull market highs in almost a year, since May of 2015. We should get some hints this week indicating if the 2015 will be tested soon.

So far the long term, intermediate term and short term uptrends are all intact. But in the last two days trading, the lack of short-term momentum may be a sign the buyers are becoming exhausted. Profit taking could cause a minor short-term correction.

Our minor CIT day is April 20. We may see the index try to hold up there, and then start a small pullback move that lasts 7-8 days. The major support for the short-term is the 2000-1975 zone. As long as this zone holds the index up, price still has a chance to move back up again.

There is a new factor affecting the intra-week price movement, the weekly index options created on Feb 26, 2016 that settle on Wednesdays. Major price movements may be disturbed by attempts to control the option settlement price.

Recently the major impact of the Wednesday index option has been to slow down price declines and disrupt the natural price movement. Of the six expiration days for this option so far, five have closed up. Something to keep in mind this Wednesday.

Last week the SPX broke March’s high and made new all-time highs for the year. Climbing above the yearly high is significant for both technical and psychological reasons. The PMO is at the top of its range and holds its sell signal, but it could be very difficult to carry the price past the current overhead resistance zone.

In the path of the advance is a long-term resistance line around 2135 formed by a broad yearly consolidation range. There is also the neckline of a bullish double bottom pattern lying at the 2100 level. Both could create strong resistance to prevent the index from advancing.

Conversely, supporting a further rally is the fact that last Thursday the 50-day moving average line just crossed above the 200-day m.a. This gives a longer term buying signal.

These contending forces may lead the SPX to challenge the 2100 resistance line in earlier trading, and pullback later. But the pullback may not be large enough to cause any material damage to the short-term uptrend.

This section contains the specific buy/sell levels for this week. It is reserved for paid subscribers.

You can get instant access for as little at $9 a month. Click the “join” link in the top menu bar.