Last week: The SP500 index made a sideways move last week. It tried to smooth an ultra-short-term overbought condition. It is still dealing with the yearly pivotal level at 2050.

This week: We have the major option expiration week for April, usually a positive week. The last week’s low or Monday’s low, whichever is lower, should be the low for this week. The index needs to break out of the 2030-2055 zone early in the week to establish the direction for the rest of week. 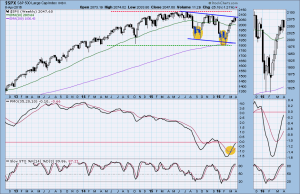 The S&P500 index stalled around the upper resistance line of the downtrend channel again last week. The price closed above the 50-week ema line with a slight overbought signal for the medium term

But the short-term is becoming overbought, and gave a selling signal when the PMO cross below the signal line. This should make us cautious. It may be a false signal, but we can’t ignore the possibility that it may bring more movement to the downside.

The earning season will start this week with Alcoa’s earning announcement after the close Monday.

In addition, other earnings reports and economic data (e.g. Jobless Claims on Thursday), as well as Fed member comments – nothing scheduled for Yellen but seven other Fed members are speaking – can all influence price moves.

If the index losses the 2000 support by closing below it on a weekly basis, the price is likely to go down further toward the support around 1950.

Conversely, If it holds above the 2025 level there is a chance for the index to move up to the 2100 level again. 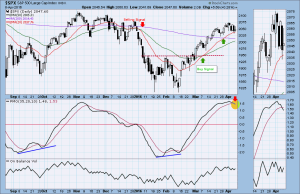 The SP500 index consolidated last week. It traded below the resistance formed by the Dec/Nov highs. PMO turns down and gave a selling signal for first time since February.

This indicates the index may face some short-term profit taking, and pull back to test the 200-day moving average line.

First we will see fighting for control within the 2030-2055 zone. Later we expect a range breakout. As long as the Index holds above 2035, the odds will favor an upside move to retest 2075-2085 for a higher closing on expiration day.

This section contains the detailed buy/sell levels for this week. It is reserved for paid subscribers.

You can get instant access for as little as $9 a month. Click the “Join” link in the top menu bar.