SPX: Marking time to the end of the quarter 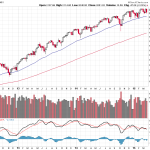 In effect the market gave back almost all the gain it made on the surge from the Fed’s dovish statements around the Open Market Committee report. The large cap index is now up three points for the year to date. So far in 2015 we are barely marking time.

The broad market is still in an uptrend. The SPX needs to drop more than 200 points to reach the 100-week moving average, for example.

That’s fine for long-term investors, but the current short-term price behavior is a bit disturbing for traders. The weekly swings – 2% up and 2% down – are starting to be regarded by traders (and perhaps traded) as bear market price action, although we are still in a bull market. At some point the short term sentiment may start to take control.

According to Merrill Lynch, US stock funds have lost an estimated $44 billion in outflows since the start of 2015. Obviously not everyone is bullish, and this week “buy the dips” is not looking quite so solid as a trading strategy.

There will be a lot of conflicting currents at work in the market this week, and the result will likely be increased volatility.

This is a short week with the markets closed on Good Friday and we also have the end-of-month and end-of-quarter on Tuesday. The usual window dressing may help hold the index up above last week’s low.

The first two days will be critical. The index will be determining if the next move will be up or down, and the decision will have an impact that may extend to the following days and weeks.

The major short-term support is at 2035. Failure to hold that support could trigger an intermediate-term correction.

Overnight Sunday (Mar. 29) the S&P500 mini-futures (ESM5) could retest Friday’s Globex low (2041) if overnight trading fails to break above 2056.50. However 2041 could act as support and the price could bounce from that level. The overnight action is likely to set the direction for the day sessions.

In the day session, we have economic reports being released at 8:30 am. The ES may gain upside momentum if the price subsequently moves above 2058. Bad news could move the price down near the 2020-15 zone to shake out the weak hands. In either case, today’s volatility will increase.