Gold made a nice little rally, aided by a decline in the USD, at a time when US equities were rallying strongly. The weekly range was about $10 larger than the previous week.

On the weekly chart (see below) the futures have now completed an A-B-C price movement, a bullish pattern in a market that has been in a long-term decline but a short-term rally. .The next question is if the symmetrical pattern completion marks a change in the short-term trend.

We may also have seen an attempt to suppress the price of gold by dumping large volume on an inactive market. Gold enthusiasts have long been claiming the price is actively suppressed. The price action last week doesn’t prove they are right; but it doesn’t prove them wrong either.

The price moved steadily up all week until Thursday morning when an unusually heavy sell order – more than twice the usual volume – moved the price down almost $20 in half an hour. Gold moved back up the rest of the day, but what could have been a break-out day was quashed.

You don’t need to resort to conspiracy theory — or conspiracy fact — to explain that event. But it fits with what gold supporters say is a long, extended series of similar events which have tended to send the price lower for the past six years. 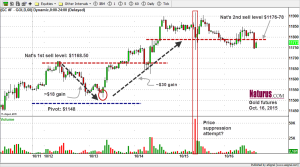 Last week was a little tricky to trade. Early in the week the price hit Nat’s 1st sell number at $1168.50 and dropped about $18 for a very nice initial profit. But the price rallied again before it hit the pivot level ($1148-50) and traders had to be alert to avoid giving back some or all of that profit.

That rally from Tuesday’s low continued for the rest of the week. Traders who recognized the reversal and got long could have taken some or most of an $30 move up to Nat’s second sell level at $1176 (or higher if they used a trailing stop to exit) for their second winning trade for the week.

The total profit available for the week was around $4,800 per contract, but it is doubtful if many traders got that much. It was still a pretty good week however. Click to enlarge the annotated chart for details. 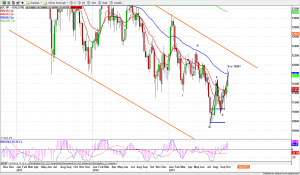 The Fed is starting to worry about the absence of inflation (as officially measured, not as prices in the real world). Low inflation doesn’t usually help gold, but continuing low interest rates and a weakening USD directs investors’ attention toward hard assets, including GOLD.

We also have renewed concerns about a US government debt ceiling crisis. GOLD should be expected to hold up the price.

In the short-term, the daily buying signal remains intact although there is some overbought condition. The price may pullback a little into the daily support area, and later resume its rally.

$1150-40 becomes a current major support zone. As long as the price doesn’t fall below and close below that area, the short-term trend is up and bullish, and the gold price is likely to return to last week’s high or go higher.

GOLD completed an A-B-C bullish correction pattern, and the time is due for one more pullback to end the long-term decline trend. But it is not necessary for GOLD to go back below this year’s low or lower. Gold could easily hold up until it reaches its strong resistance overhead before it retraces.

$1215 is the first major long-term resistance line; $1165, the 200-day moving average line, will be a key line for this week. If the price stays above that level it will continue to encourage the buyers and squeeze shorts. Every short-term pullback is likely to be bought by new buyers.