Gold slipped back below its 10-week moving average line last week on fears that the Fed will still hike rates later this month. US non-farm payrolls for August were below expectations, which argues against a rate increase. However the unemployment rate dipped to 5.1% the lowest level since 2008. The market seems not sure if that report is supportive of a rate hike or not. Given the Fed’s deliberate lack of transparency, no one else is either.

The trading last week was muted. The decline continued, but without much force, and halted at about the same price as last week, just north of $1115 an ounce, although the futures closed down $13 for the week. It was almost an inside week, which suggests price consolidation around this level.

There was a bounce from $1125 early in the week, which some of the traders in Nat’s live trade room caught, and a tradeable decline from Nat’s pivot around $1141 almost to the first buy level at $1114.50. That move returned about $25 per contract, or about $2,500 profit, which is a nice solid return for a weekly swing trade.

There was also a flash bounce followed by a flash crash on Friday. We’re treating that as a computer error; we don’t think very many contracts changed hands at the high. 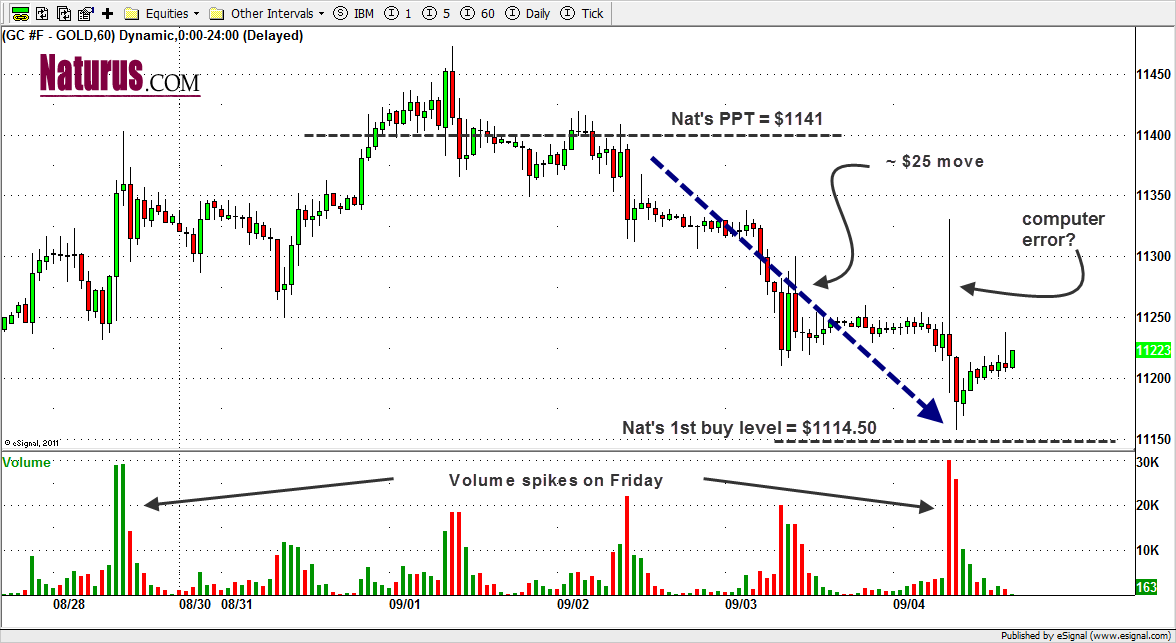 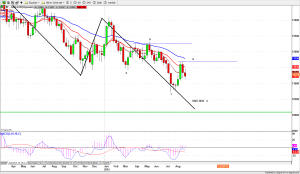 The guessing game about a Fed interest rate increase – will they? won’t they? — will continue this week, and probably right up to the Sept, 17 FOMC meeting. The time is running short, and the Fed may finally have to get off the pot. Or they could do nothing in September but hint they will do something later, which is certainly the method they have been following this year.

If there is no increase in September the next scheduled meeting is Dec. 16. The speculation will move the price of gold and financial assets. Depending on the intensity of the rumors, the price swings may be extreme.

The current declining wave has made an A-B-C-D move, but is still missing one downside wave E. Either GOLD holds up the price to continue forming sub-wave D, which could be an AB=CD formation, before it starts to make the last wave toward E at the 1035-1050 zone to totally end its long-term decline. (See the commentary this week for additional gold analysis).