Gold had a continuation rally in reaction to the minutes from the FOMC meeting.

The minutes solidified the belief the Fed will hold rates at/near zero for the rest of this year even though some Fed members argue that economic conditions may still permit an increase this year. But the market doesn’t believe them. (Neither do

There were fewer trading opportunities last week, and there certainly was no possibility of the out-sized trading profits we gained in the previous week.

The price touched Nat’s meanline on Monday afternoon and that proved to be the low of the week, Traders who captured that price had to be nimble, but they could have held on for the high of the week, which was just below Nat’s 1st sell level. That trade produced a profit of about $3,000 per contract. It’s not clear that many members got that full amount.

Alternatively, traders could have entered at the pivot point and captured about $13 profit, or $1,300 per contract, This was probably a more common result.

In many ways it was a frustrating week. The price moved exactly from Nat’s meanline to her 1st sell level, but presented fewer good trading opportunities. Here’s the annotated chart:

The expectation of a recession and of slow global growth should increase Gold’s appeal as a safe haven in troubled times. For the short term the daily momentum indicator gave a buy signal three weeks ago. $1128-30 becomes a current support zone. As long as GOLD price doesn’t fall below and close below that level, the short-term trend is up. 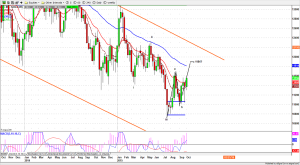 The unwinding of long dollar positions will help to push the price of GOLD up for a while.

The price is likely heading toward the overhead resistance in the $1168 area or higher up to the C top destination around $1173-76.50.

There is a slightly overbought condition in the short-term price move. But the intermediate-term still has some room for the price to go up further. If there is an early day pullback it could attract new buyers to step in.

A brief decline is likely, but overall, traders still need to focus on the long side until the intermediate-term indicators reach overbought territory.