GOLD had a pullback week. It broke the 20-ema support line in reaction to two Fed members hinting that a rate hike is possible perhaps as soon as next month. 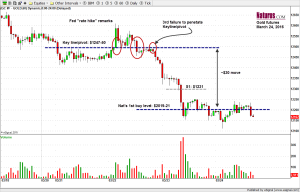 It was a pretty good week for gold traders using Nat’s calls.

The market broke below her Keyline/pivot area in the pre-market Monday, then moved back sharply higher.

But that rally was stalled by remarks from two Fed governors hinting at the possibility of future rate hikes.

That implies a stronger dollar, and gold fell back below the Keyline/pivot area. The price subsequently made three unsuccessful attempts to move back above that area, before dropping straight to Nat’s 1st buy level.

Both entries and exits were clearly defined in last week’s swing trade post, and traders who followed them gained something in the area of $3,000 per contract on the trade.

You can view last week’s swing trades in the previous gold post. 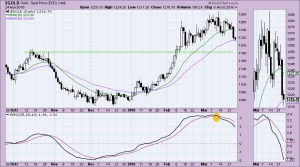 $1241.50-37.50 will be the key zone for this week. It could prevent GOLD from popping if there is a bounce in the early trading days. PMO indicator continues a short-term selling signal.

$1203.50-1205.50 is a psychological support zone. A failure to hold the price up could trigger a medium-term correction and lead GOLD to drop back down to $1180-1170 to test the February breakout level, which was last October’s high area.

Long-term support is lying at $1155-1162 zone. So far the long-term momentum indicators of haven’t moved into extremely overbought territory yet. But intermediate-term indicators show overbought, and have some signs for moving down.

Now all depends on the short-term, and whether price can be held above $1200 level. A break below $1200 level will be bearish and a further decline should then be expected.