GOLD surged more than $30 last Friday in reaction to the Non-Farm Payroll numbers which were so bad the possibility of a summer rate increase pretty much collapsed. 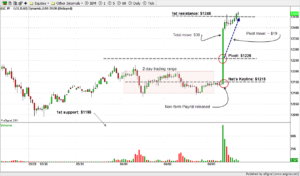 Look at that break-out move Friday! It started with the release of the Non-Farm Payroll report before the regular day session started and went straight up for about $30.

And while Nat’s inflection points encapsulated the move very neatly, it would have been a difficult trade to capture.

Trading during the holiday weekend was sparse and the switch to the July contract disrupted trading on Tuesday. Then the market stayed inside a narrow range around Nat’s Keyline on light volume for the next two days, waiting for the payroll numbers.

When they were finally released you had to be waiting with your finger on the trigger to capture the full move. Getting long at Nat’s pivot point was easier but still required quick action.

It was worth the effort — the full move returned about $3,000 per contract, the pivot move about $1,900 per contract  — but the moves were not easy to catch and the trades were not obvious. 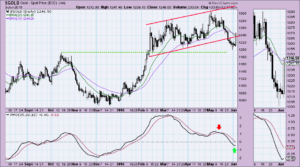 The NFP came in at just +38K, the smallest gain since 2010, and well below expectations of +160K. In the wake of Friday’s big NFP misses, the Street now expects the Fed will think more along the lines of easing rather than tightening.

The daily PMO is beginning to reach oversold territory, but the signal line hasn’t crossed above the slow line to give a buy signal yet. The 20 ema line also doesn’t cross above the 40 ema line. Both hints that Friday’s surge may be just an over-reaction emotion-driven move. GOLD could remain short-term bearish.

$1200 remains a major support at the current stage. A break below $1190 level will open the way to $1160 or lower in the short and intermediate term.

Don’t chase the buy side this week. Instead look for major resistance areas and short on strong rallies.