Gold surged sharply last week after the Fed Open Market Committee minutes were released on Wednesday, and the subsequent press conference from the Fed Chair. The Fed kept interest rate unchanged, as expected, but that was enough to prompt an up move in GOLD. 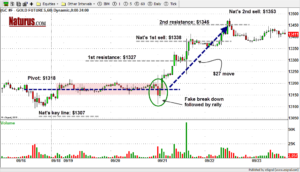 Gold and equities were dead for the first three days of the week, waiting for the minutes of the Fed Open Market Committee to be released on Wednesday afternoon.

Gold futures traded inside a $10 range (the red area on the chart) fluctuating around Nat’s pivot level on low volume.

That kind of move often takes out stops before continuing. To trade it you need to set stops wide enough to avoid the fake move, or be prepared to re-enter the trade if stopped out. Note that the head fake started in overnight trading, and stopped above the previous eek’s low and above Nat’s key line. 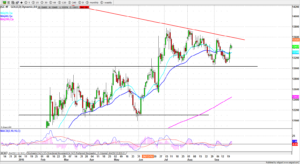 Wall Street’s jawboning about a rate hike at the Fed meeting was louder than usual, and the openly hawkish dissent by three Fed FOMC members is increasing the noise level.

With the US presidential election coming in November the Fed is unlikely to take any action until the December meeting but the uncertainty (and potentially the volatility) is increased. All this affects gold.

$1330-33 will be this week’s key zone. A break below it could trigger a stop run and push the price back down to test last week’s low area.

Therefore we still should expect $1360-65 long-term downtrend line area will stall GOLD from advancing and $1315-10 (the three-month support) support will continue to prevent GOLD from falling.

The daily PMO indicator has a early ultra-short-term buy signal, but the weekly PMO is not so encouraging for the intermediate term.

For traders, buy on pullbacks and sell on rallies for day trading with protective stops in place.