August CPI came in at +0.2%, above expectations. It moved the possibility of a rate hike next week up from low to not-quite-so-low. GOLD continued declining last week to anticipate that possibility. 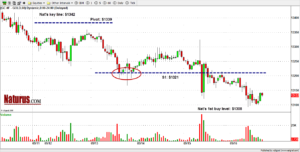 It was a scrambly kind of week for gold traders, with no firm guideposts to define the market.

The price stayed inside a fairly narrow $25 range for the week, working its way down slowly toward the support level at $1307. But it never touched Nat’s keyline, never touched the Pivot level and never touched either the buy or sell levels.

There was one marginal trade a few alert traders captured on Tuesday, when the price touched the first support level and bounced up. But the price reversed back down and reclaimed all the profits by Thursday. A blank week, the first in several months. 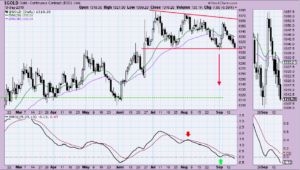 The FOMC meeting will be this week. All eyes will focus on Wednesday’s FOMC announcement and the Chair’s press conference after the announcement. GOLD could have a big swing. The Fed statement will directly effect the GOLD price.

The $1307-05 zone will be this week’s key zone. A break below it will be bearish, especially a break below the $1300 psychology level.

Gold could then go toward $1280-75 zone or lower if the Fed does raise interest rates this time. Even though I doubt the Fed will increase the rate on Wednesday, we just don’t want to rule out that possibility.

Based on the daily chart, the GOLD price has returned to last June’s broken resistance area – which has been support for the past 3 months – for a third time. If the support is going to be broken the third touch is a likely time.

Daily PMO indicator has no sign to move up to give a buy signal. There is still some room to go down before it approaches extremely oversold territory. This hints that GOLD c

And then the price has to hold the $1280-50 zone, and at the end of the week, push up to $1310 level to close. Only if this kind of move occurs, can GOLD end its short-term correction. Otherwise GOLD is likely to remain on the downside until December.