Gold edged lower last week, drifting down with the rest of the market waiting — again! — for the Fed to final make a decision about an interest rate increase at the September FOMC meeting this week.

There were decent trading opportunities for traders monitoring the price in real time, as the members of our live trade room do, but if you were relying on swing trade entry points, it was a week when everything just missed by a couple of dollars. End-of-day traders saw at least three occasions when their orders probably did not get filled, and they made no profit on the subsequent price moves. Very frustrating.

Tuesday the price missed the weekly Pivot level by $0.03 (!), declined, but stalled just above Nat’s 1st buy level, and then bounced but failed to reach her Meanline. Live traders could have captured two trades worth a total of $3,500 per contract on those moves. End-of-day swing traders probably got nothing. Aaarrrghhh! 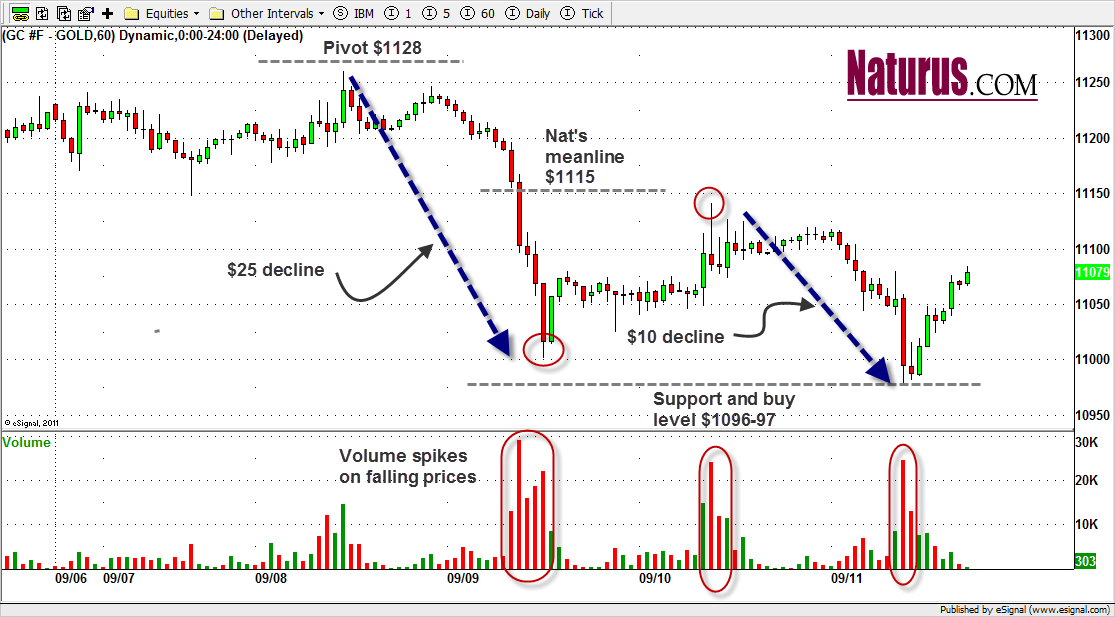 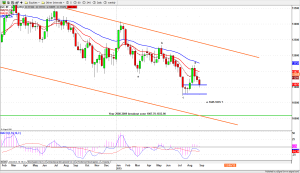 Markets remain divided on  whether the Fed will initiate its first interest rate hike this week. US PPI was unchanged in August, better than the -0.1% expected, but the University of Michigan consumer sentiment disappointed, plunging to 85.7 in September, well below expectations.

The Fed has been hinting at a rate increase all summer, and the September FOMC meeting this week is the most likely time. The Fed may want to see the the retail sales report this week before making a decision.

We don’t see the hike/no hike decision having much impact on gold once the initial flurry of news trading is completed. We think the price is set up for a bounce, either from one of the current support levels. Our attention is now focused on trying to determine when the current downtrend will be completed and the turnaround into a major correction will begin.

Download the the full weekly preview, with the buy/sell numbers, here: 150914-gold-plan 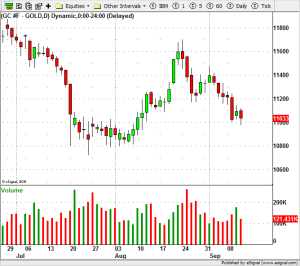 On the weekly chart (above) the bottom of the range 1104.9-1079.20 (formed from July 20 to Aug 8) becomes a short-term key support range for now. Intermediate-term momentum indicators (MACD, SST) still have an overbought condition, and on the daily chart they also indicate that GOLD is still missing one downside movement before it can have a decent bounce.

In the ultra-short-term, GOLD could continue to decline until it reaches and tests the lower longer term support line. It is approaching the long-term, intermediate-term and short-term major support zones. All traders should pay attention to those support levels. DO NOT short on those support lines.