After the US Labor Day holiday, GOLD rallied again and recovered 70% of August’s monthly loss on Tuesday. In later days it slipped back down again.

The ECB has decided not to raise interest rates and not to introduce a new stimulus program in Europe, at least for the time being.
This in turn increases the uncertainty about the Fed’s next move, and dampens short-term enthusiasm for gold. 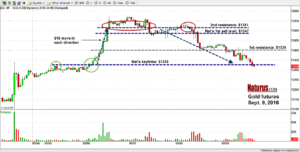 Almost all of the price activity last week was captured between Nat’s key line and her first sell level/second resistance line. It made for neat, relatively obvious trades and another lucrative week for traders who followed her calls.

The price was c0ntained by her key line until the opening of the day session after the Labor Day holiday. Then it immediately broke to the upside where it quickly reached her first sell level an the second resistance line, a move worth about $1,800 per contract.

After briefly moving slightly above the second resistance. the price obligingly retraced (after offering a second opportunity to enter on the downside on Thursday morning) and  moved right back to Nat’s key line for the close.

The full round-trip, for those who took the trades, was worth about $3,600 per contract for the two trades.

Nat’s support and resistance levels are posted over the weekend, and provide lots of opportunity to get trades in place for the overnight trading as well as the day session.

This section contains the specific buy/sell levels or this week. It is reserved for paid subscribers. Past posts are available free of charge.

You can get instant access to valuable trades in gold, the ES and ES options for as little as $9 a month. Please follow this link for the details. 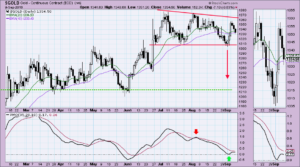 A mix of hawkish and dovish FedSpeak on Monday will continue to influence price moves in GOLD . ECB inaction last Thursday gave the Fed a little more breathing room as it decides whether or not to raise US rates at its September meeting.

A US rate increase would strengthen the US dollar and weaken gold, but probably not all that much. GOLD is likely to have a price adjustment down, but for the longer time-frame should remain above the June low at $1252.

The weekly PMO indicator turned below its signal line, which was a selling signal. Daily PMO also turned down again last Friday. Both suggest Gold price could go down further.

One thing that can prevent GOLD from slipping, is geopolitical concerns about North Korea’s latest nuclear test. Further news could help hold the price of GOLD up.