Gold had a small retracement last week after it completed a short-term A-B-C bounce.

The gold market responded sharply to news from Europe and China last week. The price dropped on increasing volume Wednesday in anticipation of the ECB stimulus announcement. After the announcement and the Chinese rate cut/devaluation news, it dropped very sharply on rising volume Friday. 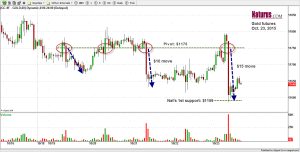 Nat’s swing trades captured both those moves last week, but you had to be actively in the market – and alert – to get them.

Both come on reversals back down through the pivot after a fake breakout up, and after the price had wandered back and forth across the pivot for most of the week.

Nat had been calling for a pullback in last week’s post, so her traders knew what to watch for. But those sudden sharp reversals are difficult to trade: profitable when you catch them, but hard to identify in time.

Friday’s plunge ended precisely at her first support level, so there was a very short trade for a couple of dollars on the bounce. 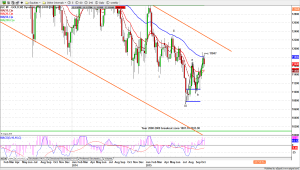 The effects of the ECB statements about new stimulus measures and China’s rate increase have already been factored into the price. Traders’ fond hopes that the Fed will not hike in December are also included in the price, so statements from the Fed increasing or decreasing the likelihood of a rate increase will also affect gold.

There is an ultra-short-term overbought condition in gold, and that is likely to produce a pullback of some kind. The 50-week moving average line is the intermediate-term resistance line; it will not be easy to break through it.

This week we are looking at the $1145-30 area for confirmation about the next move. If that area holds the price up, the price could resume its rally to challenge the 50-week moving average line again. A move below the $1146-30 level could lead GOLD down in a final decline to form a double bottom pattern or an inverted H&S pattern.

In any case the long-term support lines are listed below. If we reach those levels, buyers are likely to begin accumulating long-term positions there.