Gold broke its small wedge pattern on the daily chart last week. It mainly tried to pop up to test its overhead resistance line (20EMA). Even though the resistance line rejected GOLD, at the end of week, it still managed to gain 12.20 points for the weekly closing.

Some members took profits at that level, for a gain of about $9, worth about $900 per contract.

But others who stayed in the trade until her second resistance level ($1275) was touched on Thursday were rewarded with a $19 move, worth $1,900 per contract.

It was not the best week her trades have recorded, but still a nice profit for a very simple and well-defined trade. 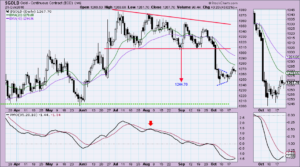 All eyes will focus on Friday’s GDP report. But last week the CCI report showed a sign of inflation, which could put some downward pressure on the price. The Presidential election campaign is grinding on. Gold many not care who wins the election, but it will respond to the global macro-economic situation, which is affected by the election results.

In technical terms, Gold is in short-term bounce process arising from a short-term oversold condition. The daily 20EMA line is the current resistance line. As long as it holds GOLD down, a sideways range from $1250 to $1275 should be expected first for this week.

A bunch of Fed members will give speeches on Monday. As long as $1250 level holds GOLD up through those guys speaking, GOLD price could stay above it until Wednesday or early Thursday to anticipate the coming GDP report.

Based on the daily chart, there is a potential H&S pattern, with the right shoulder’s top lying near $1305-1310. If daily PMO indicator doesn’t cross its signal line to give a buy signal this week, one more push down should still be expected in the coming weeks.