Gold closed below its October mid-point level, but gained 2.4% net for the month. On a weekly basis, GOLD actually lost almost 2% last week in a reaction to poor economic data and the Fed’s hawkish statement on Wednesday about a possible rate hike in December. In effect the Fed successfully talked gold down.

Nat’s support/resistance areas, as outlined in the Gold trading plan posted last weekend, pretty much identified the range for the week. But the sudden sharp move Wednesday  — a $28 decline in 30 minutes after the Fed statement — was difficult to trade unless you were actively monitoring the market in real time.

End-of-day or swing traders had a good entry when the price moved above the weekly pivot, and a good exit at the first resistance level for a $9 gain — more if you were using a trailing stop for the exit.

But the best trade of the week was available to our active traders, who had two entries and two well-defined exits on the sudden sell-off Wednesday.

Here’s the annotated intraday chart for the week. 60-minute bars. 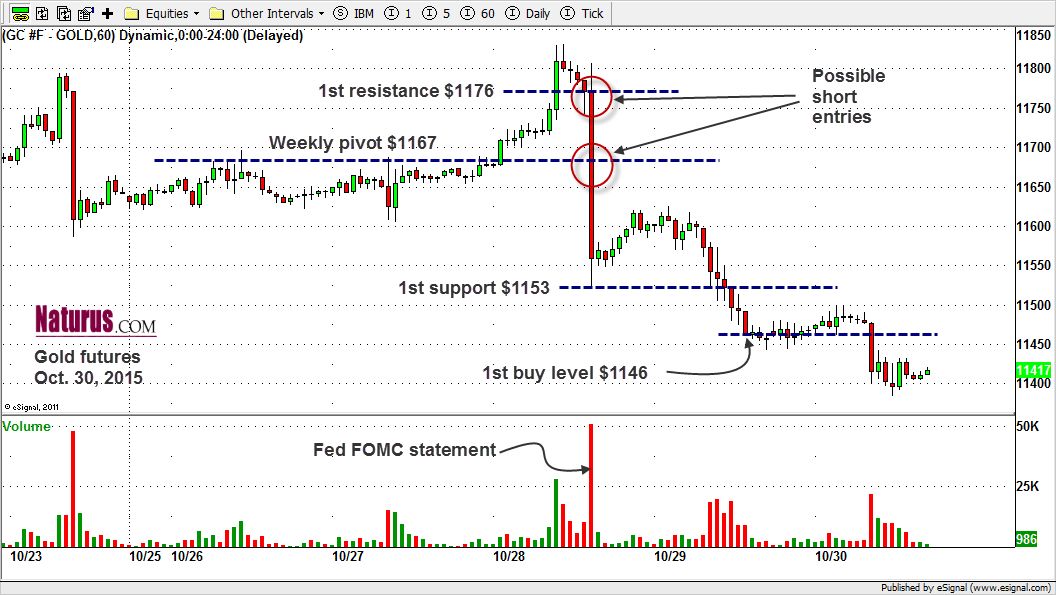 Third quarter GDP missed expectations, reflecting existing growth risk. Employment cost index and personal income all missed their numbers. Those numbers are unlikely to improve over the next 7-weeks going into the December FOMC meeting.

The drop in GOLD price last week was a short-term retracement due to overbought condition, using the prospect of a rate hike as an excuse. We think it was only an excuse. At this point it is difficult to imagine a scenario that would induce the Fed to tighten monetary policy.

If they do hike in December, essentially to prove they still can, expect a “one and done” symbolic rate increase. Interest rates will not be “normalized” any time soon. 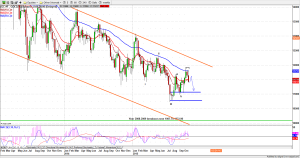 GOLD had already had 11 days on the downside after it made a high at 1191 on Oct. 15. The short-term indicators are moving into oversold territory, but are not extremely oversold. Intermediate-term indicators remain in overbought territory.

This week GOLD could have some ultra-short-term bounce, but it shouldn’t change the short-term downtrend direction.The 1168-1175 zone will be first major resistance zone to prevent the price from popping. Below the current price, the 1129-27 zone will be the first support zone. A break below 1123 level will be bearish. If it breaks, a further decline to test the major support around 1110-08 should be expected.

Once intermediate-term indicators move into oversold territory, we should see a decent rally again.