The short term correction continued to push GOLD price to the downside. After a second attempt to move back above the 1290 level failed, the price just went straight down for the rest of the week. 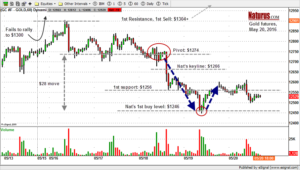 There were lots of opportunities to get the trades wrong last week.

The price failed to reach either the first sell or the first resistance early on the week, and dropped sharply to the Pivot level, where it bounced.

It did that twice, and some traders were tempted by the bounce to get long, despite Nat’s warnings in last week’s preview that the momentum was on the downside

The long side was a losing trade, because Wednesday the price returned to the pivot level and dropped sharply to the first support level and subsequently to Nat’s first buy level.

The subsequent bounce back to the support level was worth another $10 or $1,000 per contract.

This section contains the detailed buy/sell levels for this week. It is reserved for paid subscribers.

You can get instant access for as little as $9 per month at this link.