GOLD surged into the long holiday weekend after it made a brief pullback Monday and Tuesday. It managed to close above $1330 for the first time since July 2014. 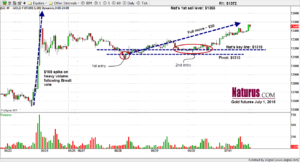 After the fireworks following the Brexit vote and the $100 spike in gold the next day, it was inevitable there would be a consolidation period while the market digested the new price levels.

Even in the relatively muted trading last week there were still good profits to be made despite the much smaller price movement.

The futures dropped to the pivot level ($1313) early in the week, and established a clear support at Nat’s key line ($1318) later in the week.

An entry at either level was profitable and the trades were relatively easy to make, no big swings or drawdowns, just a steady march up..

The price never reached the exit at Nat’s 1st sell level, but a trade entered at the pivot and held until the end of the week returned about $30 for the full move, or approximately $3,000 per contract. Not bad for a consolidation move. 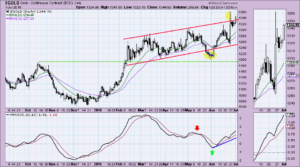 The uncertainty from the Brexit vote, as well as slow global economic growth and price risks, have continued to pressure treasury yields. Investors are increasingly seeking GOLD and silver as investments.

The PMO is moving higher and gives a strong bullish outlook in the short term. $1368.60-$1375 is the resistance line of the long-term downtrend channel, which becomes an important zone for this week.

A failure to move above it could lead GOLD to make an ultra-short-term retracement. But the retracement may be halted by new buyers and the many short-term support lines waiting below the current price.

A break above $1375 level will give more bullish outlook for the intermediate-term and long-term. A further rally up to the $1400 target could be achieved. Eventually GOLD could head higher to $1550 level, the long-term target.