Last week, GOLD had a continuation low move supported by an announcement that China holds only 1658 tonnes of gold in its official reserves. The unexpected announcement prompted selling in the Shanghai exchange overnight on Sunday and brought fear of further declines into the gold market. The price dropped $46.40 per ounce on closing from the prior week.

A large part of that decline resulted from an unusual trade at the opening of the Shanghai market Sunday night. In a period of thin trading, there was a massive dump of gold futures that drove the futures down $50 almost instantly. While gold rallied from those lows, the effect was to re-price the futures much lower. This is not a typical method of trading for anyone trying to exit a large position at the best price.

The intraday chart (below) shows how the trading accelerated outside of regular trading hours, which made them difficult to capture for North American traders who sleep at night. The price came back to Nat’s second support level briefly, before falling to her third support level later in the week.

Traders who took her third support as a buy entry made a nice profit on Friday, but we are treating that mainly as an oversold bounce. Here’s the annotated intraday chart. 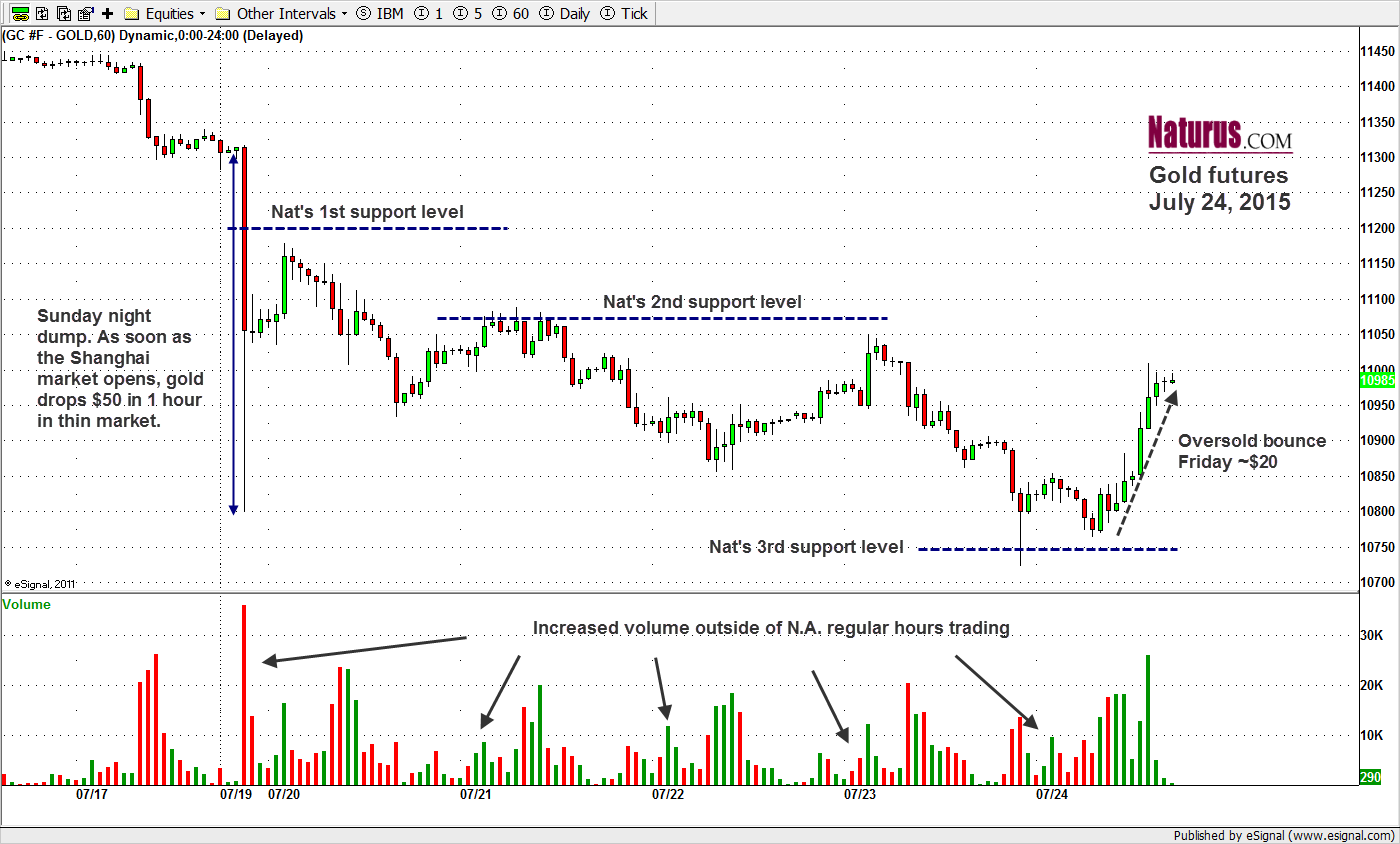 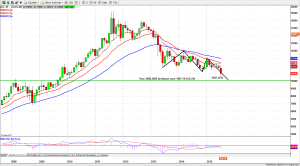 Gold is cyclical commodity, with a normal life cycle. It is also a hedge product. When there is a big financial crisis or war threatens the global financial system, gold comes alive. The rest of the time, it is treated as a reserve and used to support the local currency.

Following the Lehman Bros. crash that triggered the financial crisis of 2008, gold broke the 2008 high ($1033.90) in Oct, 2009, and went straight up to $1923.70 within 24 months. That was primarily hedging activities driving the price up, not some intrinsic change in the value of gold. It represented a premium caused by fear and uncertainty, and weakening confidence in fiat currencies.

As the perceived threat receded, especially the threat to the stability of US banks, so did the price of gold. The price has been retracing since 2012, and is now approaching the breakout level from 2008-2009. So what happens next?

Long term: In the long run, the range from $1045 to $770 is the consolidation area for the next several years, the area where long-term investors will accumulate positions to prepare for the next cyclical rally.

Intermediate term: $1250-$1350 will be a major resistance zone. As long as the price stays below that level the trend is down. It is likely for GOLD to stay below that resistance until the consolidation move completes.

But as long as the price stays under the $1200 level, the behavior we see will be typical of trading, as opposed to investing; buying at the lows and selling at the highs until GOLD reaches its long-term downside target.

Caveat: In the short term the price of gold is driven by the news of the day. If here is some new or revived crisis du jour that captures attention – Syria, the Ukraine, Greece, a fallen financial giant – all bets on the downside are off. Greece crashed and burned and the price of gold scarcely trembled; but the next crisis will likely have a different outcome.