GOLD hit the upper boundary of the long-term downtrend channel and made some ultra-short-term retracement. It was down $31 from the prior week’s closing and had a net weekly loss of 2.3%. 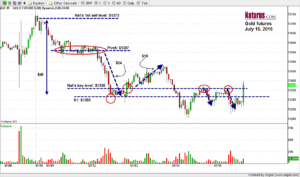 Nat’s commentary last week discussed the possibility of a short-term retracement and identified $1333-36 as an important control area, which it was.

The market briefly touched her first sell level in overnight trading Sunday, and traders who were awake could have gotten a fill at $1373, which ultimately was good for a $40 move, worth $4,000 per contract.

Many more had an opportunity to get short at her pivot level, around $1357, and to capture the second half of the leg down, worth about $25, or $2,500 per contract.

There was a nice little bounce from the control area that earned an additional $15 per contract Wednesday, and later in the week the control zone stopped two attempts to rally that also provided profitable short-term trades.

Apart from the initial move down from Nat’s sell level, most of the trades were relatively modest, but the entries were very straightforward. No surprises, and some nice profits.

This section contains the detailed buy/sell levels for this week. It is reserved for paid subscribers