GOLD rallied to the upper boundary of the long-term downtrend channel last Thursday and made a small ultra-short-term retracement on Friday after a strong jobs report. That’s about what we predicted in last week’s gold newsletter.

The retracement doesn’t eliminate the possibility of a move higher, as we discussed last week. 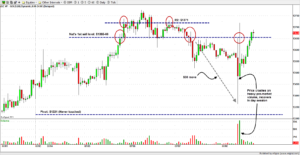 Concerns about British withdrawal from the European Union continued to puch gold markets higher, despite what looked like determined efforts to hold the price down, especially in the pre-market Friday morning..

That left traders with no clear-cut entry on the long side. On the short side. the price stayed above Nat’s 1st sell level and around the first resistance levels most of the week.

However relatively few traders would get the full move. A more likely trade was an entry at the sell level and an exit around $1350, with a potential gain of about $1,500 per contract.

This week has a full roster of speeches from Fed members, with one or more speaking at different times every day. The good job report last week raises the possibility of Fed rate increase this year and that will certainly be mentioned many times this week.

We still think a Fed rate increase before the November election is unlikely. But the incessant jawboning from the Fed may trigger a short-term correction for GOLD prices this week. 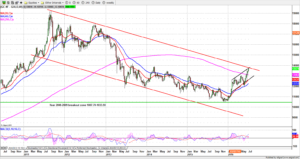 For the intermediate-term, the uptrend should remain intact. As long as Gold stays above the $1300-$1280 zone, it will not change its direction. However an ultra-short-term overbought condition could prevent the price from advancing at the current stage.

A further decline to retest the $1305-15 zone is certainly possible, especially if gold fails to move above $1378-80 but instead breaks below the key control zone ($1333-36.50). But if it occurs, that decline will not signal a change in direction.