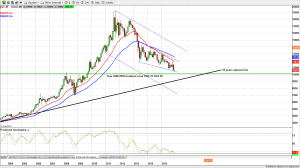 It has taken six years for GOLD to return close to the powerful initial breakout level (the green line on the chart). Gold made a new high at $1033.90 in 2008 and broke through it in 2009 to create a bull market that ran for two years.

On the very long-term chart, there is a strong oversold condition, so we will be watching the breakout level in the next few weeks to see how the price behaves here. But there is no signal yet that gold has made a bottom at this level. 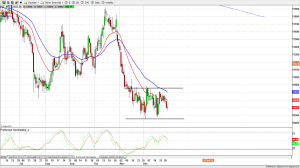 Whether GOLD will hold above the yearly breakout level is not clear. There is currently a lack of interest in gold among investors, who are discounting its value as a safe haven in troubled times.

This nonchalance can change quickly – for example, if there is a sharp sell-off in equities – but until there is a shift in sentiment, there is not much buy side pressure at this level. Absent a change in market sentiment, the prospects of a substantial bounce are limited.

For long-term traders and investors the $1000-$820 price level is worth watching. We may see buyers arriving there to hold the price above the 10-year trend line. GOLD could have a better performance in 2016, and we could be forming a bottoming range here.

GOLD had a Santa Rally during Christmas week but gave back two-thirds of the gain in the last week of the year. As usual in the holiday period the volume was very thin. The price remained within the defined 21-days range from 1088-1045.

Nat’s last newsletter for gold was for the week of Dec. 14, and it was extremely profitable for traders who followed her trades. The futures dropped about $25 from her pivot level to her 2nd support level in the early part of the week, and bounced back $32 in the pre-Christmas rally for a total profit of $5,700 per contract if you got both legs of the move. That’s close to the best outcome for the year.

But the early December calls held up for the next week as well. Anyone who sold her pivot and covered at her first buy level in the last week of the year gained a further $1,800 per contract for the trade. Taken together, they make a pretty nice Christmas present. The full trading pan for Dec. 14 is available here

Here’s the annotated intra-day chart for the last three weeks. 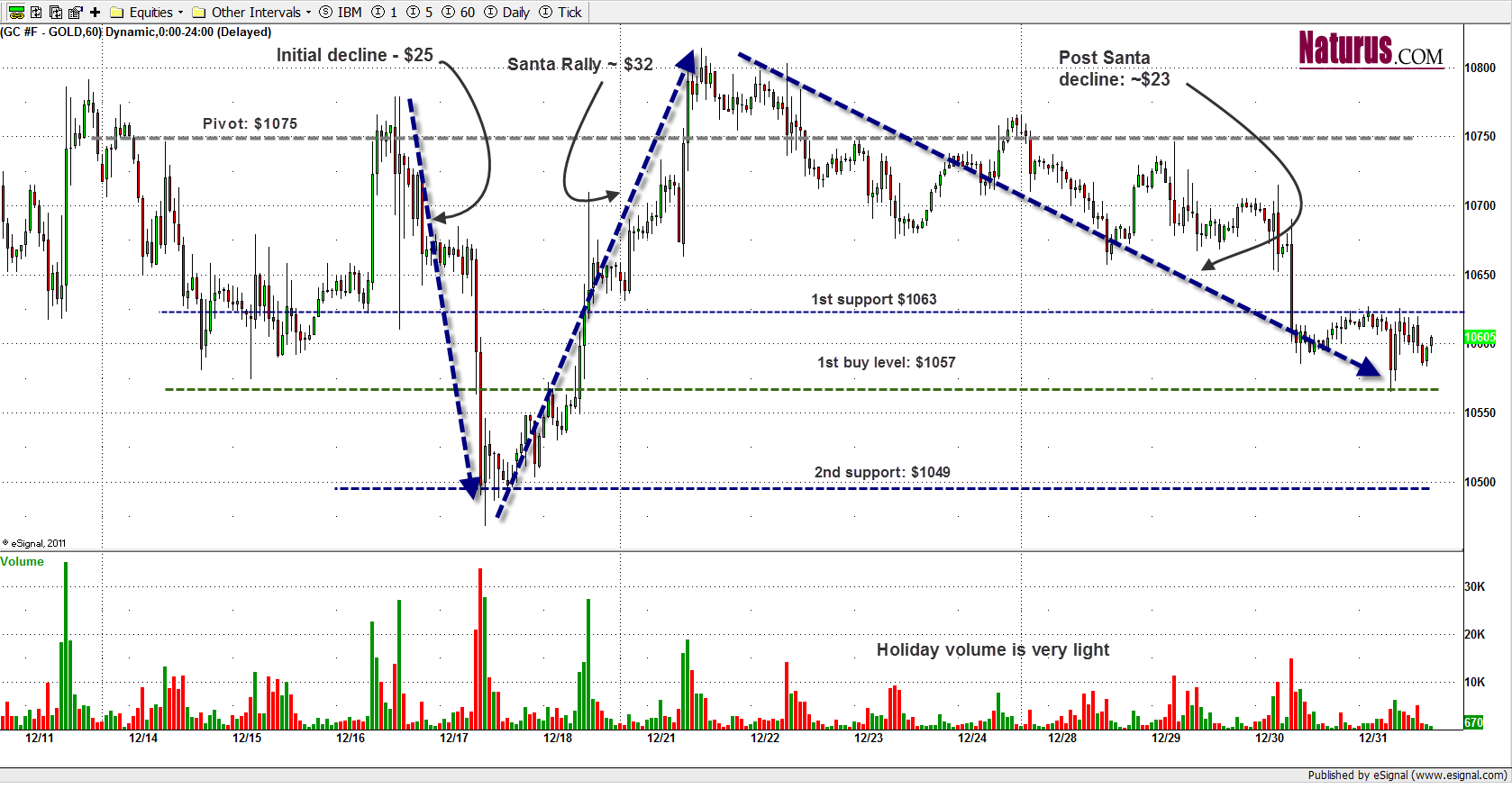 This is the first week of the new year, and the market may start a little cautiously. Gold may first repeat the last two week’s range to test the limits. It could go up to 1078-82 zone and down near 1045-42 zone before it picks a new direction.

Based on the daily chart the short-term indicator still has some room to move down before it reaches oversold territory. But the oversold condition in the long- and intermediate-term’s could entice some long-term shorts to cover at the bottom of the range

The weekly resistance zone at $1080-92 should hold GOLD down the first time it is visited. But if the equity market crashes, gold could spike up and close the week above $1104, That could trigger an intermediate-term bounce.