GOLD price surged again last Monday and Tuesday, anticipating that the Fed would not raise rates on Wednesday. There was a little sell-the-news activity and gold had a minor pullback on the following day. However gold still had a better performance in January than any other sector. So far GOLD had 5.27% net monthly gain to the January closing. 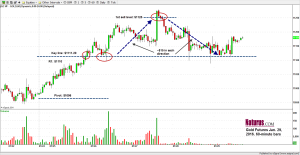 The futures opened the week above Nat’s pivot line at $1096 and marched decisively up to $1128, a very solid gain of $32. Trader’s who were not alert may have missed the early part of that move, but the break through the first resistance level and Nat’s key line at $1110-$1111 was a very clear signal, with at least two distinct opportunities to get in.

Rhat moved continued $15 to her first sell level at $1125, and promptly reversed back down to the key line, offering a good tradeable move down. Two good moves, easily tradeable. 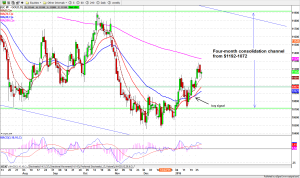 The $1080-82 range is a key support. As long as the price stays above it, GOLD could move back up to challenge the overhead resistance lines.