Gold continued to decline, but in slow motion. It managed to hold the price above $1150 level, which is very near our first downside target at $1145.50. The short-term selling could get exhausted soon.

Solid, clear, straightforward trades in gold this week. The market reacted almost exactly as expected, and Nat’s trades booked good profits for early traders, and generated even better returns for those who stayed active to the end of the week.

There were two clear trades last week. The first began in the overnight market, when the price spiked to Nat’s keyline at $1186, and continued in Monday’s day session when it returned to the pivot level.

Both those points gave clear entries, and got traders on board for the subsequent decline down to the first support level at $1161. Those trades were worth $19 to $25 per contract, depending on where you entered.

Remember, the trades are posted before the overnight session opens Sunday night, so there was lots of time to get in.

The price bounced from the first support level and returned to the pivot in Wednesday’s day session, setting up the second trade, a short from around $1180 (the pivot level) back down to the support, where it closed Friday. That move was worth about $20 per contract.

Depending on which trades they took, Nat’s members made potential profits of $1,900 to $4,600 per contract for the week.

A few upper-level member also captured a third trade from last week’s numbers, the bounce from the support back up to the Pivot. That was worth an additional $1,900 per contract to those who recognized what was happening and reacted promptly. 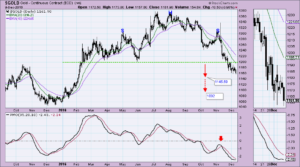 The FOMC Policy announcement is published this Wednesday, amid fevered speculation – as usual – about a potential rate hike. The Fed rate hike, if any, will determine the price movement in Gold. Last week federal-funds futures were implying a 93% chance of rate hike this week.

It shouldn’t surprise anyone if the Fed does hike. But the further speculation of two additional increases in 2017 may be overblown.

The talk of further increases to come poses a big risk for GOLD. GOLD moved into a bear market after Fed officials forecast two rate hikes in 2017 last September. Now the short-term and intermediate-term are oversold.

If the Fed does raise rates this week, but uses dovish language in the Fed statement – that’s a double conditional – traders should be prepared for GOLD short covering that may push the price back up to the $1200 broken support level area or higher if buyers regain control of $1212

However, because the long-term is still bearish, any bounce up to a major resistance zone may be countered by new sellers entering the market.

In particular, when the short-term indicator recovers from the oversold condition and moves into overbought territory the selling should resume again.

In that case GOLD can go to the next downside target $1092, and the short-term oversold condition can get more oversold, especially if the Fed expresses clear and strong support for two more rate hikes in 2017.

For now, Gold is all Fed, all the time.