Last week gold traded within a narrow $22 range between roughly $1100 and $1080 an ounce. It managed to hold the low from the previous week, established by the massive pre-market dump of futures two weeks ago, and even made the short-term bounce we predicted last week. The air of optimism when the FOMC meeting didn’t announce an interest rate hike may also have helped hold gold up.

Gold has now spent two weeks within essentially the same narrow range. The off-hours dump of futures on Sunday July 19 has effectively re-priced the futures below the previous support levels.

This was another tough week to trade, as all narrow ranges are. The price skittered back and forth around – mainly below – Nat’s pivot point at $1096 until the price worked its way down to the $1080 area, before the over-sold bounce recovered the entire weekly range in a couple of hours. It subsequently dropped back to the pivot area.

This week the price declines tended to occur during off-market hours, the price rallies during the regular trading session. That probably doen’t have any significance for future price action, but it illustrates the current difference between the US and overseas market. 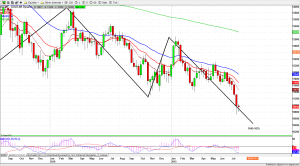 Last Friday GOLD has a short-term oversold bounce, as we expected. This bounce may last until the short-term indicators move into overbought territory. In the intermediate-term and long-term, the downtrend is likely to hold the price under their major resistance lines.

This week 1106.50 will be a key line. A move above it will trigger a further bounce up to 1120-35 zone. But holding under it, may create a sideways move to repeat last Friday’s range or lower to the 1062-55 zone. The 1035-45 area is currently a major support level. Overall, we expect a modest bounce of some kind this week.

Above 1150 there are resistance lines at 1168 and 1188. Those lines are expected to form a major resistance zone for the rest of the year if there is no major event or news to disrupt it.

We still will expect GOLD to have weakness if the Fed raises interest rates at the coming September meeting. The long-term consolidation zone range from 1045 to 770 is still expected for the coming years.

If the Fed changes its policy, it may change the direction of the outlook for gold. Therefore, as traders, we should follow the price action and trade in a short time-frame on both sides. For investors, you should get financial advice from a qualified professional before making decisions about long-term investments in gold.