The Chinese equity markets – especially the Shanghai Composite – plummeted last week and started a sharp decline in other markets around the world, including the US. The concerns about the slow growth in China and the Chinese government’s devaluation of its currency helped GOLD rebound from five-year lows.

The bloodbath in world equity markets accelerated on Thursday and Friday, and the immediate result was a continuation of the bounce in gold prices. Traders who entered at Nat’s pivot level on Tuesday hit her first profit target on Wednesday. If they held all or part of their position for the next day, they reached the second profit target at $1144. That represented a profit of about $3,500 per contract.

And if they held on for the weekly top around $1165 they realized about $$5,600 per profit, which is a pretty good return in any market.

Here’s the annotated chart for last week. Note the increasing volume as the week progresses and equitities swoon. The full trading plan for last week is now publicly available in last week’s post. 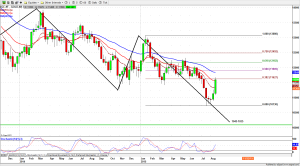 GOLD may retrace back down some days of this week, but a lot depends on how the US equity market moves. Gold could bounce further if US equities continues to fall and investors continue to seek a safe haven. At the current stage, GOLD will be the place to park the money.

While prices were low China accumulated GOLD; the reserves data published August 15 show an increase to 1677 tons from 1658 tons in July. This should encourage the former buyers to hold their positions and inspire new buyers to jump in.

GOLD broke the ultra-short-term resistance zone at 1127-28.50 and gave a buying signal last week. Even though the ultra-short-term has an overbought condition, the short-term (daily) still hasn’t reached extremely overbought territory area yet, and the intermediate-term (weekly) still has some room for the indicators to move up The long-term indicators are neutral, and the general outlook is bullish. In other words, the price will hold up for a while.

1144-45 will be a key zone this week. Gold price could hold above it to go sideways to build support for a move higher later. A failure to hold up that zone could lead the price to drop near 1127-22.50 or lower toward 1108-03 for retesting. Any dip may well be bought if the US equity market fails to bounce this week.

Based on the weekly and daily charts, the 1072 area should be the low for this year.