GOLD attempted to recover its prior Friday’s loss last week, but failed. However the loss was a tiny $1.20 on a net weekly basis. 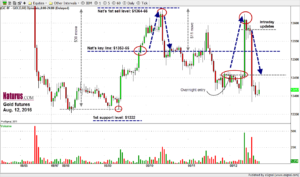 Lot’s of excellent trading opportunities last week, some of them captured by Nat’s weekly trading levels, and more captured by her intraday swing calls for Full Access members.

Some weekly swing traders may have caught the move off the lows around $1336, when the market was unable to fall to the weekly support level at $1332.

Those who correctly interpreted that move had an exit at Nat’s first selling level that captured about $30, or $3,000 per contract.

But the best trades of the week were available for Nat’s Full Access members, who could access her intraday updates for gold.

Between Thursday’s close and Friday’s close her intraday calls captured about $35.5 from the ramp and retracement, worth $3,550 per contract, which would pay the cost of the membership for about 18 months. Not her best day ever, but pretty good.

This section contains the specific buy/sell levels for this week. It is reserved for paid subscribers.

You can get instant access to this content and other valuable market insights for as little as $9 per month. Please follow this link for the details. 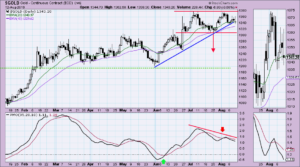 Money continues to flow into sovereign bond and stock markets. This could result in some vulnerability for GOLD.

Nevertheless, GOLD is in a short-term technical correction process. For the long run, it is likely to continue going higher.
This week $1362-65 is a major resistance zone. By staying under that level the price could form a bearish symmetrical pattern; the completion for this pattern is lying at $1323.60-1328 zone.

Last week’s low $1335 is a key control zone for the downside. A break below it could lead the price to drop fast toward the destination of that bearish pattern.

A potential bearish double top pattern still could be formed in the coming days. The neckline should be lying a major support zone at $1310-08.50 area.

Whether GOLD can get to this major support zone depends on whether the $1323.50-21.50 area holds up or not this week.
While the equity market wants to make new highs on its major expiration week, there is a chance for GOLD to complete its short-term correction and resume its rally from its major support zone.