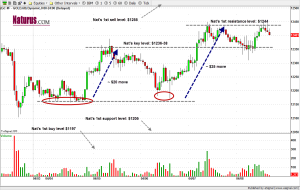 There were limited trading opportunities last week. The full range for the week was slightly less than $30 and the price action was choppy.

The price never reached Nat’s buy level, sell level or first support, so there were no obvious entries for traders following her swing trades.

However traders monitoring the market intraday had a clear entry at the well-defined intraday support around $2016 on Monday, and an equally clear exit at Nat’s key line Tuesday. That move captured about $20 per contract, worth approximately $2,000.

Later in the week the price attempted to return to that support level. It failed, but the subsequent bounce carried first to Nat’s key line again, and then to her first resistance level. Again the entry was not obvious, but the exits were clearly marked.

By the end of the week a clear trading range was established between Nat’s key level and the first resistance that returned a smaller profit… but a profit nonetheless.

This section contains the detailed buy/sell levels for this week. It is restricted to paid subscribers.

You can get instant access for as little as $9 per month by clicking the “Join” link in the top menu bar.