It pulled back slightly on Friday and closed for the day below the open which gave an ultra-short-term reversal sign. 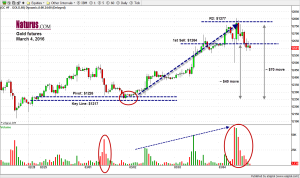 Nat’s buy and sell levels neatly captured virtually the entire move last week. Traders who followed her post last week on Sunday had an opportunity to get in early. Those we missed the entry had a second chance on Tuesday evening.

There is still lots of opposition to an increase in gold prices. Not the volume spikes on declines.

The breakout last week was impressive. The intermediate-term gave out a “buy signal”.

But ultra-short-term has extremely overbought condition, and may lead to a minor pullback this week. 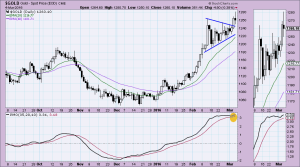 The $1220 level is the low band line of a triangle pattern, overlapping the 20-day moving average. It should act support for this week. We also expect this support would accommodate a pullback without causing too much damage.
As long as the $1220 level holds GOLD up, the intermediate-term and short-term remain bullish.

But if there is a move below $1250 we should expect GOLD to drop down near the $1220 level to bring new buyers into the market.