GOLD surged last Wednesday in response to a sharp sell-off in Asian markets. But later it ended only slightly higher than the prior week’s closing after the ECB president Mario Draghi suggested that the “ECB will review and possibly reconsider its monetary policy in March.” The hint of more QE – maybe – was enough to stall the gold rally 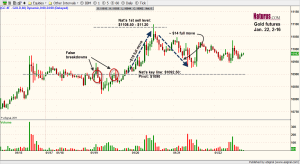 Last week’s trading was a little choppy at the beginning of the week, but Nat’s inflection numbers caught a nice move up mid-week, and a decent retracement after the ECB comments.

The price whipped around her key llne/pivot point Monday before making two false breakdowns on Tuesday. Traders who went short at that point were likely stopped out.

But the third test of the key line and the breakout were a clear signal to get long, a move that was good for $19 per contract. The retracement from Nat’s sell level captured another $14 per contract before the price settled into a narrowing sideways pattern to end the week.

Sorry. This section contains the specific buy/sell levels for next week. It is restricted to paid subscribers.

You can get instant access by subscribing for as little a $9 per month … and until Sunday, its available at half-price. Here’s the link.