Last week, GOLD started dropping as soon as the markets opened, and continued until it reached roughly the area of Nat’s first buy level around $1172.50. It bumped along in a narrow range at that level until Friday’s close.

The big news for gold last week was the same as the news for equities: the continuing standoff between Greece and the European institutions which have lent it so much money.

Over the previous weekend it was all smiles and chuckles as various commentators proudly predicted that a deal was just hours away. As that reckless optimism faded – in reality, a ‘deal’ may be possible but there is no solution except either default or large-scale debt forgiveness and equally large losses for creditors – the price of gold moved steadily lower.

Over the week the price made a lower high but halted the decline roughly at the previous low – close to an “inside week,” which is generally a wait-and-see pattern usually followed by a break-out from the previous range. What remains unknown is when the break out will occur, and which direction it will take.

Some of Nat’s traders were able to get short when the price broke below her pivot level and her Key line on Monday, and that move returned about a $20 gain ($2000 per contract) by Wednesday’s close. But it was a quick trade and lots of traders missed it. You can read the full trading plan for last week in the previous gold post. Members can read the plan for next week below. 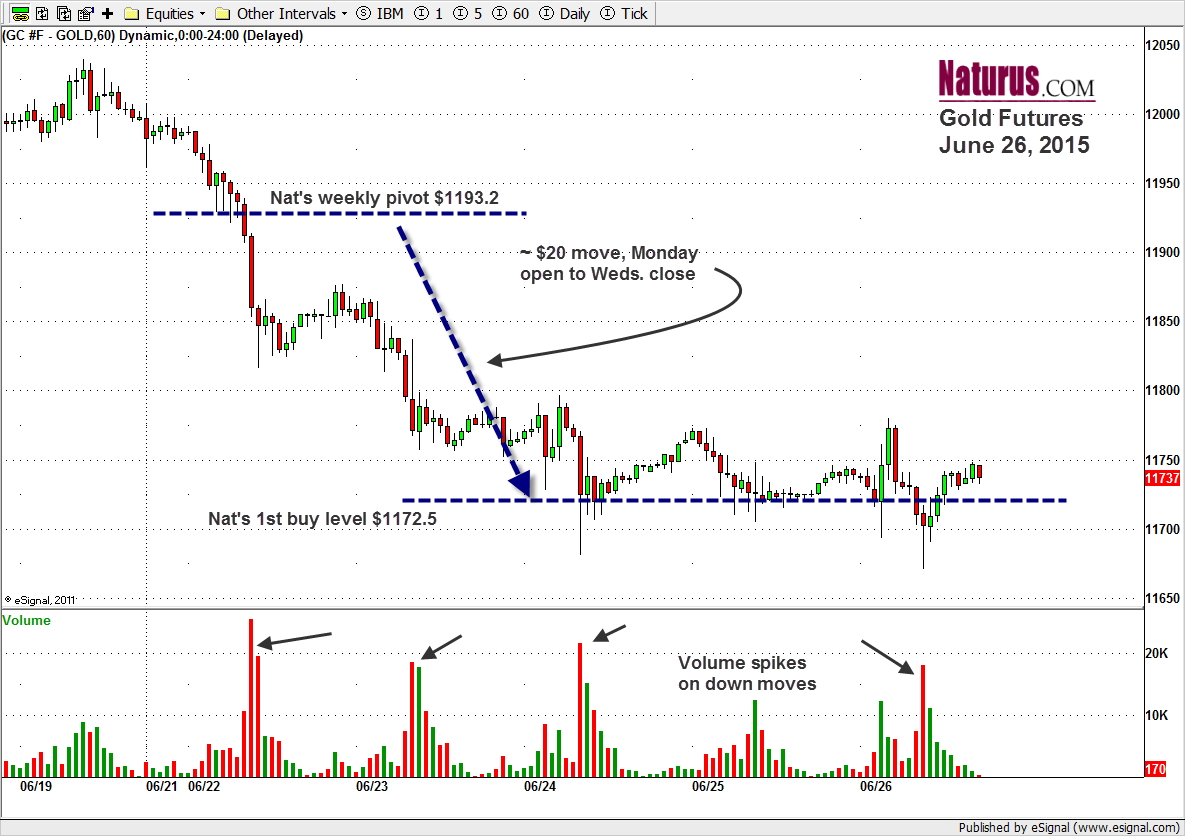 This will be a chaotic weekend in Europe and the result may be sharp volatility in Gold. The Greek debt drama has escalated with Greece scheduling a referendum on the creditors’ proposals for July 5 – widely seen as a prelude to a default – while the creditors talk openly of capital controls, encouraging a run on Greek banks. The Eurozone has cut off the the Emergency Liquidity Assistance that was keeping Greek banks afloat, and the banks may not open Monday morning.

At this stage the outcome is not known but Chaos favors gold, and the turmoil may well boost gold prices. This drama has been performed before. But it will continue to underpin the GOLD market for a while.

Here is the member content and the link to the full analysis for the week of June 29, 2015 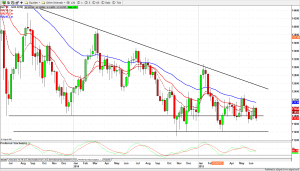 On the weekly chart, GOLD traded below its long-term momentum resistance lines (20/40ema lines). That means the trend traders (Shorts) haven’t given up their trading strategy and kept selling on every bounce.

Now the price has dropped to the long-term support zone (1180-1140). and we are watching to see if this support zone can hold the price up. We need to see how long the price will stay inside this zone and how the volume reacts in this area.

Gold looks like it is in the ending a long-term correction process, but it is still too soon to say the process is complete. The price needs to stay low for a while and keep pushing the weak hands out of the market first before enough positions are accumulated at this low level to allow a break through the resistance lines that will change the trend direction. So far it is still too early. But a triple bottom at the 1140 level – if the price gets back down to that level – should not be ignored.

Download the full analysis with the buy/sell numbers here: 150629-gold