Last week GOLD was the Dog That Didn’t Bark. In the Sherlock Holmes story with that name, the detective solves the case because of a clue everyone else overlooked: the dog that should have barked didn’t.

Gold didn’t bark last week. In the midst of a full-blown financial crisis, when gold’s function as a hedge in times of financial instability should have been driving the market up, gold futures went down. In fact they made the lowest price in three months, and bumped along the bottom of a long-term bottom in a downtrend that goes back to last October. The price rebounded somewhat on the last day of the week as the market waited for the outcome on the Greek referendum on Sunday.

Either gold’s role as  safe haven in times of trouble has stopped working, or something else is going on. One clue may be found in this article from Zerohedge.com, which points out a massive increase in the precious metals derivatives held by two Wall Street giants, J.P. Morgan and Citigroup.

However Nat’s projections held up well — the technical analysis seemed more important than external events — and traders who managed to get on board had a profitable week. The price gapped up to her key line in the pre-market Monday morning, and traded down to her first buy level until Thursday, when they promptly bounced back for a nice one-day gain.

The full down move was worth $3,000 per contract, and her traders managed to capture at least part of that move; the bounce on Friday was worth $1,200 per contract (note the Fibonacci relationship at work) and was readily available to active traders. You can read the full analysis for last week here. 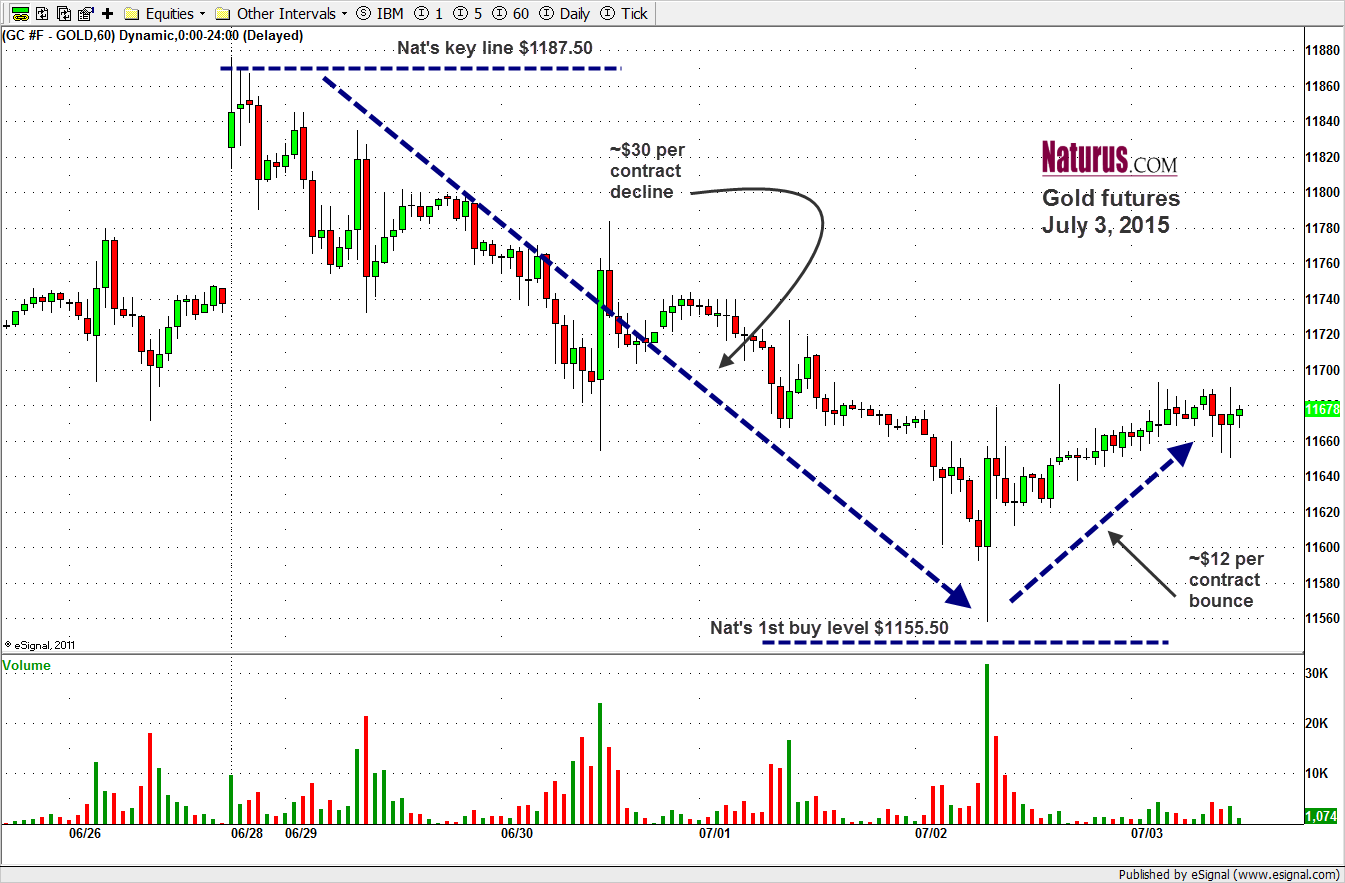 The value of Gold is usually tied to its use as a hedge against inflation and against financial instability, but the effectiveness of that hedge is being called into question in the current Greek crisis.

The whole Grexit drama has been playing for months in real time, and it may be the case that investor are simply tired of the whole thing. However we think it is still directly and indirectly influencing GOLD price moves.

The sudden Greek referendum and capital control gave the impression that events would spiral out of control and cause GOLD to spike up in response. But this could be a very short-term move. The price still is in a major downtrend channel. To change the long-term downtrend will be not easy. It takes time and capital to force the trend direction change.

For the long run, the full measurement for the long-term downside target in the 1045-35 zone, which still is a little away from the current price. External events could help to hold up the price and delay the move toward that target.

Download the full analysis with the buy/sell numbers here: 150706-gold