Last week, GOLD gave up half the previous week’s gain. The price continued to dance around the mixed comments from Fed’s dovish and hawkish factions. The weekly range pretty much mirrored what had happened the week before; a slightly higher high, and a slightly higher low  – except that it closed $30 lower. 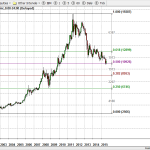 The end of the month is on Monday, so this is a reasonable time to look at Gold price performance over the longer term. The monthly chart (left) shows gold prices back to the turn of the century, and places the current price in the context of the long run-up and subsequent decline. The retracemement is about at the 50% point of the long-term move — around $1100 — and has made a little bounce from that level.

That doesn’t tell us much that is useful for trading the next few days or the next week, but it shows that the long-term price behavior is hardly unusual. The chart looks like just about any other price series.There may be price suppression in Gold, as some traders claim, but the long-term chart doesn’t show it.

The intra-day chart (below) is the tool we use for short-term trading. Last week the trade was on the downside, between the pivot level and the support. Traders who shorted the break below the pivot and covered at the first support level made about $22 per contract on the decline. Those who followed up by buying the bounce from the support into the close made another $16 per contract, for about $42 per contract.

More conservative traders who used Nat’s meanline and buy levels for entries and exits got essentially the same results, but probably entered the traders earlier and exited earlier. Given the leverage in gold futures, $42 per contract is worth about $4,200 for the week. 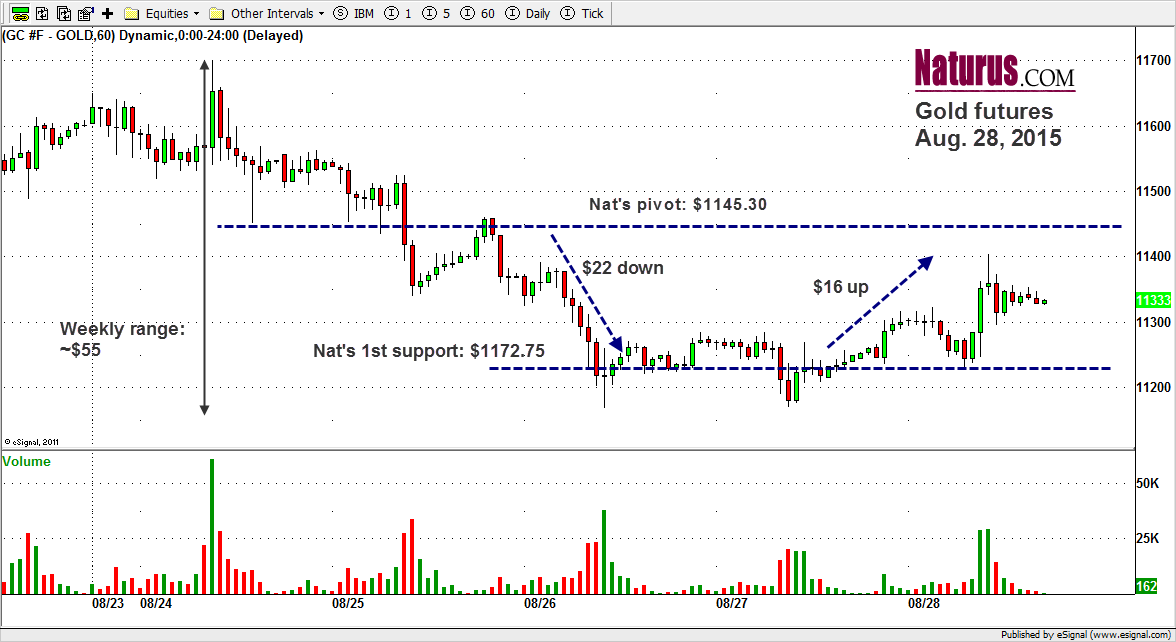 GOLD prices this week will be affected by the economic policy discussions in Jackson Hole, WYO, and by the Non-Farm Payroll report later in the week. There is a general expectation that the Fed will not tighten in September.

If we see a break above 1170.50 level, there is a great chance for GOLD to move up to challenge 1200. This week is the ending of August and the week before the Labor Day holiday. Gold price could have a choppy behavior.