For the first seven weeks of the year the net cumulative profits for Nat’s inflection points reached $7,760 — slightly more than $1000 per week, trading single contracts with a maximum stop loss of $300 per trade.

That is a spectaclar return, considering that an initial brokerage deposit of about $10,000 would be sufficient to finance those trades. (All the trades are day-only, so the margin requirements are about 10% of the normal maintenance margins).

But in the last two weeks of February the bottom fell out of the market, and the prices moved beyond well-established suport/resistance levels every day, while the maximum daily range ballooned. The result was a series of orders for all three contracts that were stopped out in sequence.

The automated system generated a series of losing trades with no offsetting winners that took the cumulative profit for the year from almost $8000 to less than $1500 in under 10 days.

Winning trades were still about twice as large as losers. But the ratio of winners to losers dropped to about 1:5. This is truly a black swan event. We’ve been following Nat’s inflection trades for years, and that has never happened before. Here’s how it looked. 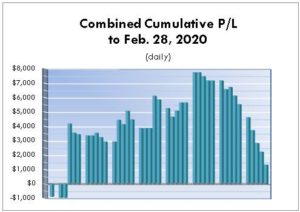 Click the image to enlarge. Each bar represents one trading day starting January 2, 2020. The spaces between bars represent one week. The bars show the cumulative year-to-date profit/loss at the end of that day for all trades.

Could these losses be avoided?

Sure. But it would have required an alert trader to recognize a fundamental change in the market and react to it promptly.

Traders monitoring the markets in real time, like Nat’s Full Access members, were in a position to profit handsomely from the change. But an automated trading system was not.

These charts are a record of hypothetical trades using a virtually automatic trading method. In the real world anyone trading Nat’s inflection points would make some obvious adjustments when they ran into a string of bad trades like these.

However all of the adjustments, while the would have saved money this time might increase your losses next time.

One adjustment would be to stop taking buy-side entries at previously-established support in a crashing market — to stop trying to catch the falling knife. Long entries in the last week of February lost $4,200.

The problem is that you may miss the rally when the market turns … and it will turn.

Another adjustment would be to stop trading gold futures; Gold trades had negative returns in both January and Februrary. Eliminating all gold trades would increase the profits for 2020 by almost $2500.

But the relative profitability of different contracts varies over time. This time gold was a drag. But at some point gold futures may return great profits while the ES and oil are lagging.

For the study period trades on the ES earned a little less than $1500, including the sharp sell-off at the end of February; trades on oil futures earned about $2,350 for the two months. Gold lost $2435.

Please log in again. The login page will open in a new tab. After logging in you can close it and return to this page.