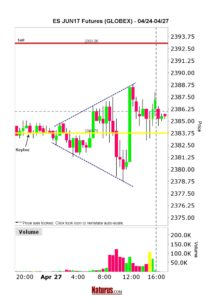 The ES bounced up to Nat’s keyline shortly after Wednesday’s close and stayed there all yesterday, but with increasingly large swings in price.

This price sequence — higher highs followed by lower lows — forms what is often described as a megaphone pattern.

The pattern doesn’t have much predictive power — it breaks out about as often in either direction — but the increasing amplitude of the swings is an indication of the greater volatility in the market in advance of the end-of-month window dressing and option expirations.

This pattern sets up a series of range trades, but the extent of each move is difficult to gauge. Trades based on Nat’s keyline required careful attention to the exits, and unless you grasped the developing pattern early it was hard to get the direction right.

Traders looking for bounces from the keyline were stopped out.