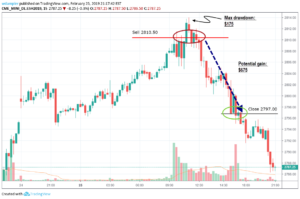 This wasn’t the most profitable trade this week (see below for the the trade that was) but was the easiest to execute, returned a decent profit with very little effort, and was available to every member, including people signed up for the Really Cheap Membership at a whopping  monthly cost of $19. What’s not to like?

Monday workbooks are usually posted Saturday evening, so everybody had a full day-and-a-half to  place orders.

The usual method of trading these systemic inflection points is to post limit orders overnight with a protective stop and an exit market-on-close the following day.

(One benefit of this method — there are many others — is that the margin required is about 80% smaller than holding positions past the close of trading. That means members can execute these trades with a smaller account, or take larger positions with the same account).

The entry was near the high of the day. The maximum adverse move or ‘drawdown’ was the high of the day at 2814.00, so the maximum temporary losing position was $175, well below the $300 stop we are using for these system trades in the ES. Covering the position at the close returned a potential gain of $675. It would be difficult to imagine a simpler trade.

Going into Friday’s trading, we were not doing well, despite the nifty trade in the S&P500 e-minis described above.

Two trades in oil and two in gold had been stopped out with a losses, and we had only one small winner in gold or oil. A couple of potentially profitable trades had missed the entry level by a few pennies. It looked like we were going to post the first week without a net profit in 2019.

And then we caught this trade in oil on Friday.

A limit order at Nat’s first sell level was filled in the overnight market in the small hours of Friday morning. That proved to be almost the high of the day. The market then closed near the low of the day, almost $2.00 per barrel lower.

Nat’s call caught virtually all of that move for a potential gain of $1920, and turned a losing week into a comfortable win.