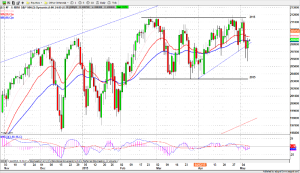 After a seesaw move overnight, ES quickly found support before the market opened, and moved up to recover half of the loss from Wednesday’s sell-off. But this could be seen as anticipating today’s non-farm payroll report. If the report is not as good as the Street expects, the market is still vulnerable to sell off again.

While the intraday price action was positive, and the futures closed higher, they made a lower low and lower high than the previous day.

2064.50-62.50 is a control zone for the downside movement. A move below this control zone will be bearish. It could trigger more selling to push the price below the 2059-56 zone.

Today is weekly option expiration. Wednesday’s selling caused the option meanline to switch down to 2075. Now it is likely for ES to whipsaw between 2100 and 2060 to balance out the Puts and Calls before the market closes.