Last week we saw a bear trap in the SPX pre-market, with a sudden drop followed by a strong up-trend for the rest of the week. The market reacted positively to FOMC meeting minutes released mid-week and dovish comments from various Fed members. Concerns about an imminent rate hike were likely alleviated by the Fed jawboning, and by overseas market rallies.

This week is the expiration for April index options, so relatively volatile moves will likely continue. The economic reports and earnings from major banks this week will help to move the market. We may see the SPX make new highs this week. 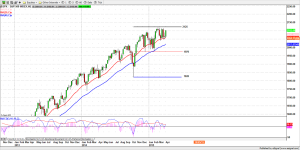 There is no change in the long term outlook. It remains bullish and the upside is strong. Recently the SPX has been trading inside the 2118 to 2045 range, but this range is going to break soon.

2045-60 remains as the pivot level for this year. Holding above the pivot will encourage buyers to continue stepping into the market for a push higher.

2125 is the range resistance line lying just overhead; a move above it would be a clear breakout to the upside.

On the downside, a break below 2040 would be an obvious breach of support, and could send the index down to test the next intermediate-term major support in the 2000-1980 zone.

So far the market has made several failed attempts to establish a long-term correction. There are several reasons for this failure. One is the Fed, which keep making brave noises about a rate increase in June, but keeps attaching new conditions which are mainly seen as convenient excuses if the rate hike fails to materialize.

A second is overseas markets, particularly the strength of the Chinese market, which has had a big run to the upside. The effect is to make US markets look relatively cheap, and encourage buyers to believe the US markets are likely to follow the same path.

No matter the reason for the lack of a major correction, we still expect the SPX to rally further up in long run. A short-term correction can’t be avoided, but it will be seen mainly as an opportunity for long-term investors to buy in at a relatively low level.

Last week the SPX closed above 2100 for the first time since the mid-March pullback, and it may be able to close above that important level for the weekly option expiration at the end of this week.

But be cautious. In the past there have been several occasions when the index closed at a high level on Friday for option expiration, then moved away from that high the following week – banging the close to create a favorable option outcome.

Based on the daily chart, SPX remains inside the broad range from 2125 to 2045. Within this range there is a small “wedge” pattern, which could lead this index to make an A-B-C-D-E move.

Right now the SPX is at or near its projected D top area, and this week the index will show if that pattern works or not. If it holds below 2110, it is possible for the SPX to go for the E low, which may be around the 2065 area. If it breaks above 2115 we’ll be reconsidering our interpretation of the price action to concentrate on a bullish double bottom instead.

No matter which pattern this index is going to form, the price action in between 2125 and 2045 should be regarded as short-term noise which is not likely to affect the long-term outlook until it moves outside that range. 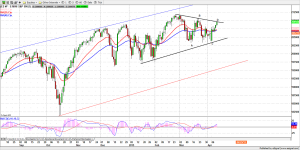 ES rallied up to 2096 on Friday and closed near the high. Based on the daily chart, the pattern – a potential double bottom within a “wedge” pattern – gives a bullish outlook.

But Friday’s volume was very thin, 37% below the volume on the rally day. That could result from the weekly option expiration, but it also indicates many buyers were still on the sidelines on Friday.

Today the ES is at a decision point. 2100-2098.50 is an important price point, a psychological resistance zone. A break above it indicates that the developing A-B-C-D-E pattern is invalid, and the breakout could create a bull run up to 2115-13 to retest March’s high.

A failure to break above that psychological resistance could send the ES back to last Friday’s low 2083-84. If it then moves further, below 2064, the outlook will be bearish. It would indicate that ES still intends to form an A-B-C-D-E pattern, and the price could drop back down to the 2050 area.

The trading strategy is to maintain a neutral position and watch for momentum strength if there is a breakout. Once a breakout move is confirmed, trade in the direction of the breakout.

To see the full analysis, including the buy/sell levels, download this file: 150413-plan . This is the last week the full trading plan will be available to non-members.